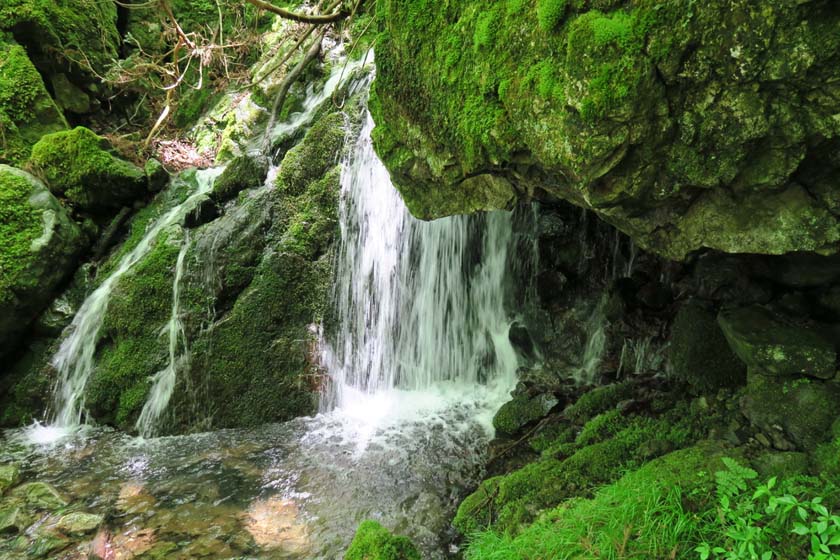 You can eat fresh food at Taishomati Market

My next destination was Shimanto. On the way, I had a bonito tataki lunch (seared fish) at a place called Kure Taishomachi Market in Tosa Town. The Kure Taishomachi Market is an interesting place with a mix of old and new stores, and there is an old-fashioned tokoroten (Japanese jelly noodles made from seaweed) store, where I had dessert. It cost 100 yen per serving, but it was delicious.

I stayed overnight at a public inn called Kuroshio no Yado, and had bonito tataki again for dinner. The inn also had a bath with heated seawater.

From there, I went to Tosa-Shimizu and Cape Ashizuri, through Shimanto Town. The road along the ocean made me feel like I was driving on the Sanriku Coast of Tohoku. In short, there are many mountains behind the coast, and villages are clustered in the inlets to where the rivers flow.

Tosa-Shimizu was a much more modern and larger fishing port than I expected. This is where the big boats depart for months to chase after the bonito. I also observed the scene of the boats at the landing, and saw several varieties of fish mixed in with the bonito.

Takemasa Shoten: Continuing to make dried bonito flakes with the traditional method for over 100 years

From there, it took about 10 minutes to reach a small town called Shimizu Nakahama. On the outskirts of this town is a store called Takemasa Shoten that has been making dried bonito flakes the same way for over 100 years.

There, the dried bonito flakes are made from a type of fish called Soda Katsuo (Flower Bonito), and the workshop is interesting because it looks like a throwback to some decades ago, the Showa and Taisho eras. There are about 10 people in the workshop, sitting and doing some type of manual work. At the back of the workshop, there is a large old furnace, where wood is thrown into the fire to dry the bonito.

I spent about half an hour talking with the store owner’s wife, and she was very interesting. There is a jetty behind the workshop, and the ocean is just beyond it. From what I hear, the pilgrims (on the Shikoku Pilgrimage) walk along the jetty.

Nakahama is also the birthplace of John Manjiro. When he was 14-years-old, he was on a fishing boat, assigned to the duty of cooking rice, and drifted to Torishima Island, where he was rescued by an American whaling ship. Since the country was closed to the outside world, he was taken to the United States, and became the first Japanese person to receive a formal education in America.

He later returned to Japan to teach English to Shojiro Goto (politician) and Yataro Iwasaki (industrialist), and also traveled to the U.S. with Kaishu Katsu (statesman and naval engineer) as an interpreter onboard the Kanrin Maru. Like Iwasaki and Ryoma Sakamoto, there were many people in Tosa who directed their views outward. Or perhaps it was because Tosa is surrounded by deep mountains, and these innovators were moved by the Pacific Ocean that extended before them.

As the name implies, I was expecting Cape Ashizuri to be a steep cliff, but it wasn’t at all, and the area was a dark green. A pilgrimage temple was also located there.

My next destination was the Shimanto River, known as “the last crystal clear river in Japan.” I’ve been curious about this river for a long time. I drove from Shimanto City, all the way upstream from the mouth of the river. Unlike the small river I had imagined, it was crystal clear and incredibly wide. The surroundings were nothing but mountains and greenery. It was definitely beautiful.

What was interesting to me was the number of “Michi no Eki” (roadside stations); these are rest stop facilities located on the open roads, equipped with parking lots, restrooms, restaurants, and souvenir shops that sell local products. Kochi has the ocean, mountains, rivers, and roadside stations.

As I went all the way up the road along the river, I came to the town of Tsuno. Then, I drove deep into the mountains, to a canyon that is named for the Shimanto River Headwaters.

As I drove along the really narrow mountain road, wondering if such a place really existed, I came across a sign that read “Shimanto River Headwaters.” I had to walk from there. Hiking up the mountain, and looking at the small stream beside me in the beautiful mossy forest, reminded me of walking in the forest on Yakushima Island.

The best wild vegetable tempura I’ve ever had

After finishing the hike at the headwaters, I drove for a while and found a place that looked like an old public recreation center. I decided to have lunch there. The local mothers and grandmothers were entrusted by the town to run the facility, but when I inquired about lunch, the answer was that they could only serve udon.

After that, I stayed in a town called Yusuhara, and noticed that even though this town was deep in the mountains, there were many stylish modern buildings. I learned more about the town, and found out that Kengo Kuma designed the lodging facilities, town hall, and other structures. His sense of style may be a bit different from mine, but I also found it interesting. Incidentally, this village was home to many of the heroic warriors of the Edo period, and it was there that Ryoma separated from his clan.

The next day, I traveled from the mountains to the ocean on the national highway, and headed to Onikita Town in Ehime Prefecture. I crossed the border between Kochi and Ehime prefectures, when the thought came to me that I’d like to travel to Ehime, next time. Kochi Prefecture is huge. It was a very enjoyable trip.