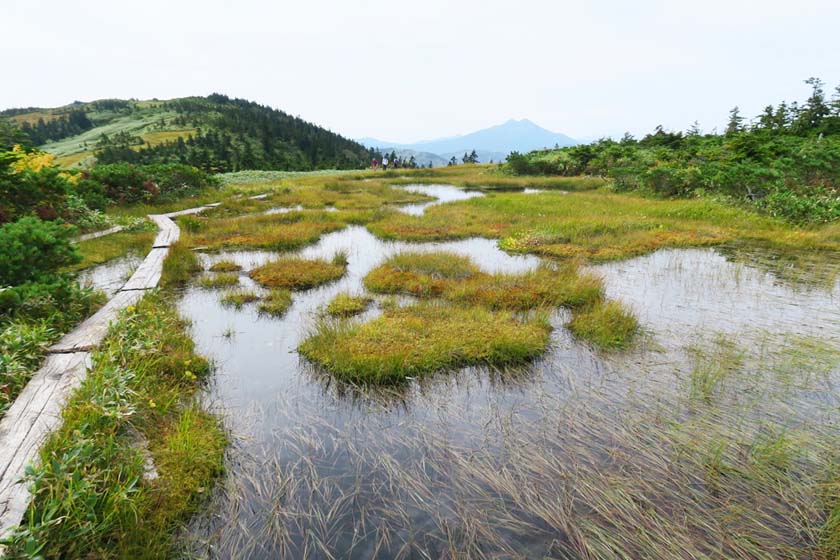 I have been to Oze many times. I remember, as if it was only yesterday, that I took a night bus to Oshimizu; from there, I went to Ozegahara and slept at Todengoya (Toden Hut), like a sardine packed in a can.

Essence of Japan in the vastness of Oze

The view of Mt. Shibutsu from Ozegahara in the evening was unbelievably beautiful. I feel the essence of Japan in the vastness of Ozegahara, with its peaceful mountains and beautiful greenery. I have been there with friends, climbed Mt. Shibutsu with my parents, and skied from the top of Mt. Hiuchigatake. Oze makes me sentimental, and it is an important place to me.

This was the first time I visited Oze in a long time. I went from Hinoemata in Fukushima Prefecture. I had to drive about two hours from Aizu-Tajima, where I rented a car. It was a secluded area in the mountains.

I stayed at a guest house called Seseragi no Yado Ozeno. The spacious bath was filled with clear hot spring water, and it was relaxing. Dinner was wonderful. It was explained to me that except for the Iwana (mountain trout), all the ingredients were harvested in their own fields, rice paddies, and forests. All of the dishes were lightly seasoned, and made the most of the flavors of the ingredients. That is something you can’t find at inns or hotels.

The owner of the guest house told me many stories. He told me about the long history of the village, and that the only surnames that exist there are Hoshi, Hirano, and Tachibana. When Kunio Yanagita (a Japanese scholar and the father of Japanese native folkloristics) visited the village, he proclaimed that it was the “Paradise of Japan.”

The next day, I had rice balls made at the guest house, and went on a day trip to Mt. Aizu-Komagatake. I’ve

always wanted to go hiking at that mountain, but never had the chance, because the snow always remains until late spring, so this was my first time. It was very steep hike up to where there was a lodge. Once I passed it, however, it was like a plateau with ponds scattered on the mountain. The scenery and flowers were beautiful, just like a garden on the mountain.

Walking along the wooden path of Ozegahara

After descending the mountain, I returned to the guest house, and headed for Oze the next day. There is a place called Oike, which is about 30 minutes away from Hinoemata by rental car. I left the car there, and walked to Ozegahara.

Mt. Hiuchigatake was right in front of me, and there was a route to ascend it and go down to Ozenuma. But there was snow halfway up the mountain, so I took the Ura-Hiuchi forest trail that wound around clockwise at the foot of the mountain. The beech forests there are especially beautiful in the springtime, around mid-May, when the snow begins to melt around the trees, and fresh green appears on the treetops.

After a couple of hours of walking on a relatively flat mountain road, I came to a hot spring dwelling at the northern end of Ozegahara. It was a stylish mountain lodge with a large deck, where reclining chairs were lined up, facing the direction of Ozegahara. From there, I walked along the wooden path of Ozegahara. I could see Mt. Shibutsu on the right.

After walking for a while, I reached a place where many mountain lodges are located, such as Ozegoya (Oze Hut) and Yashirogoya (Yashiro Hut) are built. There is a fork at that point, and walking to the right leads to Mt. Shibutsu, while walking to the left leads to Ozenuma and Hiuchidake. Since I planned on a day trip this time, I decided to go around to the left at Hiuchigatake, and took the path on the left to Ozenuma. It was a bit of a climb from there, but I didn’t mind because it felt good.

After a while, I reached Ozenuma, and from there, I went to Numayama Pass. I took a shuttle bus from Numayama Pass to Oike. The bus schedule was posted at the lodge, and as on previous trips, I was almost certain I’d have to run at the last minute to catch the bus. As it turned out, I had to do so again, this time. As seen from Oike, Mt. Hiuchigatake is a huge mountain. Oze is always a great place, no matter how many times I visit.

Teshirosawa hot spring located deep in the mountains of Oku-Kinu

There are many fun places to walk around in Oze, such as Marunuma, Oku-Nikko, and Oku-Kinu, and there are many hot springs as well. One of the best is Teshirosawa Onsen, located deep in the mountains of Oku-Kinu. It is about 10 -15 km from Ozenuma in a direct line, but people usually have to take detours all the way. This is due to the mountains being so deep that it takes a half or full day of both walking and driving.

To get to Teshirosawa Onsen, it takes less than two hours by bus from Tobu Kinugawa Station, traveling along the mountain road; and another two hours by foot from the last bus stop. I went there in the spring, and it was very beautiful, with the cherry blossoms blooming along the ravine by the mountain trail. When I booked my reservation at this inn, it cost about 15,000 yen per person. But when I arrived at my cabin, I found that the rooms were beautiful and most importantly, the hot spring was incredible. There was an open-air bath along a deep green ravine, and the water had a delicate scent of sulfur. Even better was the amazing dinner, with steak and vegetables that you would expect to be served at a hotel. It was delicious. There was also a good selection of wines.

Oze is truly a wonderful place. I hope it will always retain its beautiful nature. I would like to visit the area again.