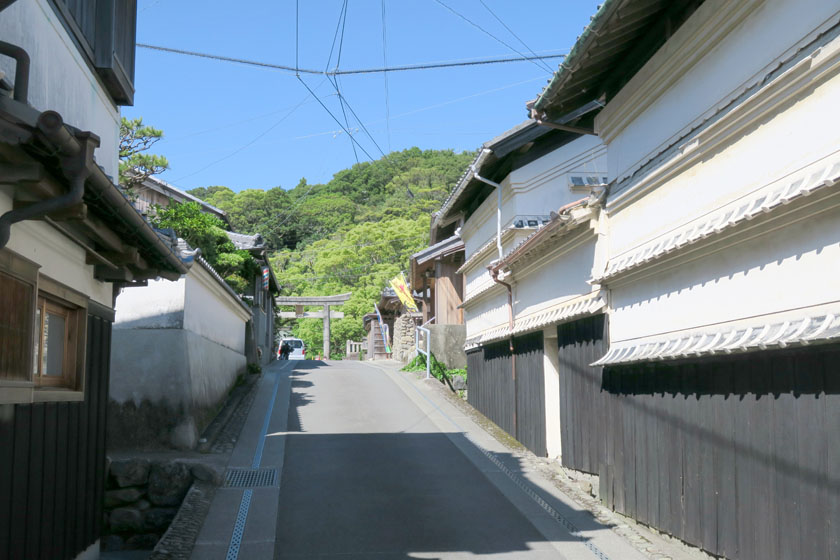 Kochi, a place of great nature

I took a flight from Fukuoka to Kochi Ryoma Airport. It took a little less than an hour, but the view from the plane was quite spectacular. As we entered the airspace over Shikoku, all we could see were layers of mountains and rivers flowing between them, with no man-made structures in sight. After a while, the vast Pacific Ocean came into view.

Kochi, the land of Tosa (previous name of Kochi Prefecture), is a land of mountains, rivers, and ocean, where nature remains in its entirety.

An inn in the last village

I rented a car at the airport, and headed toward Cape Muroto on the national highway, arriving in Aki City. From there, I made a phone call to Hatayama Rest House to confirm the location of where I would be staying that night. This is the place I searched for on the internet the night before, and it is famous for its chicken dishes.

From Aki, I drove for about 20 minutes along a mountain road, wondering if there were really accommodations in such a deep mountainous area, and arrived at a village with beautiful yuzu (citrus) fields. The parking lot was the ground of an abandoned elementary school, and the inn was located nearby.

After arriving at the inn, I talked with the owner and learned that this was the last village (where there are no more villages on this mountain), and nearly all the villagers were gone. He was from this village, and was determined not to abandon it, so he started his own chicken business. He also rented a facility that was no longer in use to operate his lodging business.

When I asked why the yuzu fields were maintained so beautifully when there were no villagers, I was told that the farmers who resided in Aki City commuted to the area to farm. This may be one of the answers to how agriculture can succeed in depopulated areas, in the future.

The real pleasure of traveling is interacting with people

The owner’s main business is raising and selling a type of chicken called Tosajiro, and he is very particular about it. For dinner at the inn, the main dish is Tosajiro chicken, and various parts of the meat are roasted on a shichirin (small portable charcoal grill). The owner sat beside me and cooked the meat, piece by piece. Manipulating his chopsticks for over half an hour, he talked about the meat, how to cook it, and other details about the chickens. I could feel his passion for the chickens, and was quite amazed.

I have traveled to many places, but had never experienced anything like this, and it was very interesting. Ultimately, I think the real pleasure of traveling is meeting and interacting with people.

Visit to a bronze statue of Shintaro Nakaoka in Muroto

The next morning, I returned to Aki City. The birthplace of Yataro Iwasaki, the founder of Mitsubishi, is located there, and I went to explore the area. It has the atmosphere of the Meiji era countryside, spacious and quite nice.

After that, I went to Cape Muroto. It is a beautiful place with thick greenery and scattered rocks. I was impressed by the many camellia trees that surpassed me in height. Just past the cape, a bronze statue of Shintaro Nakaoka stands on a plateau along the mountain. How insanely cool!

When Nakaoka was 30-years-old, he was killed, along with Ryoma Sakamoto, at the Omiya Inn in Kyoto. He was one of the people who was responsible for modernizing Japan at the end of the Edo period.

The place where Kukai practiced asceticism

After passing the cape and continuing on, there is a cave on the side of the road. This is the famous Mikurodo Cave, where it is said that Kukai (renowned monk and founder of Shingon school of Buddhism) practiced asceticism in his youth. When you sit in this cave and look out, all you can see is the sky and ocean. It is said that this is where Kukai got his name.

Kukai was born in Sanuki (Kagawa prefecture), during the Nara period. In his youth, he practiced mountain asceticism in Shikoku and Wakayama, and in the early Heian period, he traveled to Chang’an (capital of the Tang Dynasty) as a member of the Japanese envoy to China. He was an intellectual giant who completed his studies in Buddhism, civil engineering, and medicine in two years, an accomplishment that would normally take 20 years. He then returned to Japan to introduce Shingon Esoteric Buddhism.

He is still revered by the common people of Japan as a familiar and accessible figure. It is hard to believe that he lived 1,200 years ago. It leads me to believe that perhaps his energy and intelligence, having become legendary, has been passed down through the generations.

He has played countless roles in many lands, including the founding of Toji Temple in Kyoto; the founding of Koyasan; and civil engineering work in Shikoku. The Shikoku Pilgrimage follows in the footsteps of his youthful asceticism, and many foreigners also participate.

Pilgrimage to 88 temples related to Kukai

This pilgrimage goes around to 88 temples related to Kukai (known posthumously as Kobo Daishi) all over Shikoku, and there is also one in Muroto. It is called Hotsumisakiji Temple, and is located on a mountaintop, on the cape.

There are two ways to go on the pilgrimage: the “normal way” (forward direction), and the “reverse way” (reverse direction). If you go in the forward direction, the previous temple is Yakuoji in Tokushima Prefecture; and from there to Hotsumisakiji Temple is a substantial 72 kilometers, making it the most difficult part. There are lodgings around the temple, and when I went there, many female pilgrims were on the bus.

During this trip, I stopped at several pilgrimage temples in Kochi Prefecture. There were inns, tea shops, and Japanese confectionaries in front of the temple gates, and groups of pilgrims were chanting loudly in the temple compounds. I fully realized the liveliness of religion that was ever-present.

At a Japanese confectionary, I had a nice conversation with a shopkeeper who told me that the pilgrimage to 88 temples on foot is physically demanding, but once you start, you become addicted to it. I think it is very good for an individual’s mental health to walk for 40 days, without thinking about anything.

There were also some foreigners dressed in white clothing (traditional attire for pilgrims), walking along the path. One day, I would like to go on the pilgrimage with my spouse, and experience it as a couple.