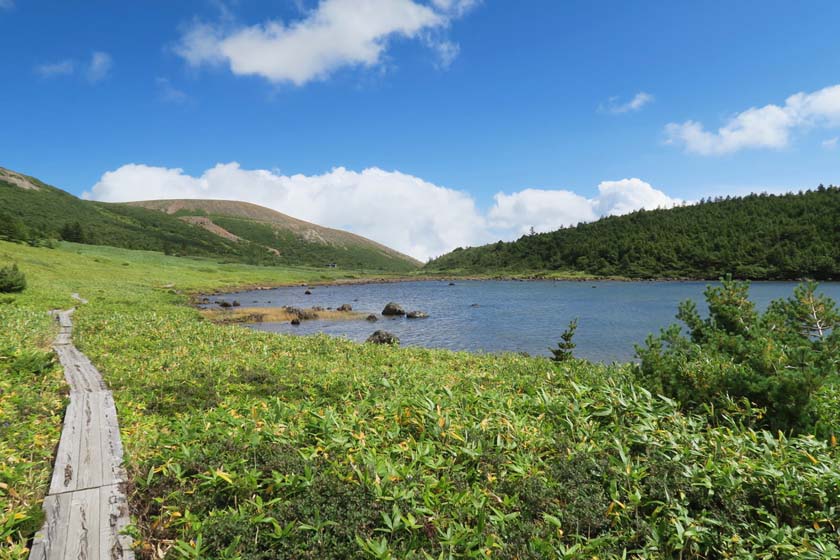 After descending from Mt. Adatara, I drove to the Tsuchiyu area, and on to the Bandai-Azuma Skyline. My accommodations were at the Mitoya Ryokan in Makugawa Onsen. It was a one-house ryokan (traditional inn), a little off the skyline, and was located quite deep in the mountains. The hot spring had cloudy white water, and a wonderful open-air bath.

I had my lunch made at the inn in the morning, and my destination was Mt. Higashi Azuma. I left the car at Jyododaira, and hiked for about three hours round trip through the marshlands. It’s a beautiful place, with an ambience that’s a bit like Oze. To the side of the skyline, there is a small mountain called Azuma Kofuji, which reminded me that I was in a volcanic zone.

I descended the Skyline and headed for Goshikinuma. I went to Goshikinuma 40 years ago, where there was a famous promenade, and I remember walking around, looking at the swamps in different colors of red, green, and blue. On this recent trip, I stayed at the Urabandai Kokumin Kyukamura (National Park Resorts of Japan).

The next day, I hiked up the mountain, Mt. Bandai from the Happodai trailhead at the Bandai-san Gold Line. It’s a bit of a tough hike, but took about two hours to reach the top of Mt. Bandai. The view from there was fantastic, especially Inawashiro.

I could see rice fields stretching all the way to the flanks of Inawashiro.

As I was descending Mt. Bandai, I met a person who was repairing the trail with a pickaxe. He told me that during the season when the rice fields are filled with water, it resembles a lake spreading out all the way, and it is beautiful. He was from Soma City in Fukushima Prefecture, and was repairing the trail by himself. He said that many elementary and junior high school students in Fukushima ascend the mountain as part of their school hiking program, and that he regularly volunteers to help them.

Fukushima and the Pacific side of the prefecture, including Soma, continues to be in a difficult situation due to the nuclear accident (Fukushima Daiichi Nuclear Power Plant), but I was glad that there are wonderful people like him.

I descended Mt. Bandai and headed for my final destination, Kitakata. The town is famous for its ramen, but since I had never eaten it before, I asked the townspeople for a suggestion on which ramen shop I should go to, and went there. I was surprised to find that the soup was made from shellfish. It was refreshing and delicious.

Kitakata is also famous for its many fine warehouses. The warehouses, as well as their gardens, are available for tours.

There was a sembei (rice cracker) shop near a warehouse. I couldn’t resist entering the shop because it had a sign with “Tamari Rice Crackers” written on it. It was established in the Meiji era (1868-1912), and the owner was planning to close the shop because there was no successor. However, his daughter, who was working in the city, decided to take over the business. I was told that all the factory workers and company employees were women. It was there that I heard about the Aizu “Rule of Jyu.”

Kitakata is one of the best sake breweries in Japan

This town is also famous for its sake, and there are seven sake breweries. At one of the breweries, it was explained to me that they use subterranean water from the Iide Mountains for their sake. He pointed to the Iide Mountains in the distance behind the brewery. It was the only mountain that still had snow on it.

I had hiked Mt. Iide before, and entered from the direction of Yonezawa in Yamagata Prefecture, but it was deep in the mountains, and I remember carrying 30 kg of luggage for about eight hours, sweating as I hiked up the steep trail. This time, when I reached the top of Mt. Iide, it was paradise. There was snow, even though it was mid-summer, and even though it was on top of the mountain, the tenting area was spacious. I felt relaxed, and talked with several people. After staying overnight in the tent, I walked all along the mountain, and then, descended to a village in the mountains on the Fukushima side, which was 30 minutes by car from Kitakata City.

From Kitakata, I took the highway back to Shirakawa, returned the rental car, and made a straight shot back to Tokyo by Shinkansen. I love Fukushima Prefecture. It’s like my spiritual home.