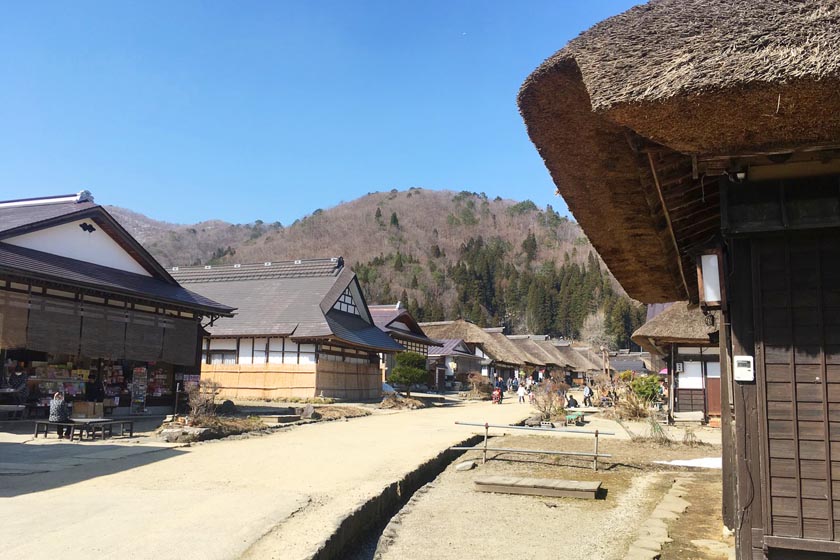 It took less than two hours by Shinkansen (bullet train) from Tokyo Station to Shin-Shirakawa Station. I rented a car there, and traveled around Fukushima. From the station, I drove to Koshi Onsen (hot springs), with the Nasu Plateau on my left, and then to Aizu Shimogo Town.

From there, I headed north along the Aizu Highway for about 20 minutes to Yunokami Onsen via Tonohetsuri (meaning “tower cliffs overlooking a river” in Aizu dialect).

Ouchijuku: Eating soba with a single thick green onion instead of chopsticks

Tonohetsuri is a series of cliffs along the river, and there is a boardwalk that offers quite a view. There are several hot spring inns in the small village of Yunokami, but I stayed at an inn called Yujin, this time. Dinner was served in my guest room, and the main dish was soba noodles. As was the case with Hinoemata, the brown country buckwheat noodles were delicious, with good texture and flavor.

Ouchijuku is a famous tourist destination, where the streets of an Edo period post town remain. A wide road passes straight through the town, and large thatched houses line both sides of the road, preserving the atmosphere of the town. The view from the observation platform at the north end was particularly wonderful.

Lunch was soba noodles again. The soba there is called “Negi Soba,” and it is warm kake-soba (soba noodles with soy sauce base broth) with a single thick green onion on top. The onion is supposed to be eaten with the soba, but it was difficult.

My next destination was Aizu-Wakamatsu. Returning to Yunokami, I headed north along the Aizu Highway, but at the entrance of the Ouchijuku intersection, I turned right and took a detour to Iwase Yumoto Onsen. At the previous inn the day before, I learned that this hot spring is famous, as the cartoonist and essayist, Zenji Tsuge, stayed there. The rural mountain atmosphere at the hot spring resort made me feel like I had traveled back in time to 1950.

I returned to the Aizu Highway, and arrived at an inn called Shintaki in Higashiyama Onsen, on the outskirts of Aizu-Wakamatsu City. It was reasonably priced, and the food was quite good. There was also a rock bath called “Sennen no Yu,” which was used by the Aizu lords. It felt as though I was underground, and the bath was very good.

There are many fine lacquerware stores in this city, and I went to one called Suzuzen, which has been in business since the Edo Tenpo period (1831-1845). I spent all my time in a gallery that was converted from a warehouse and an old building. Lacquerware vessels are my favorite because they are light and beautiful. Aizu lacquerware is especially gorgeous. The quality is wonderful. I hope that traditional Japanese craft remains forever.

The Aizu clan fought and was defeated by the Imperial Army in the Boshin War. Surrounded by mountains and Lake Inawashiro, this land is known for its rice. The large rice fields can be seen while driving around. It was probably because of the rice that the clan was strong enough to fight against the Imperial forces.

At the end of the Tokugawa Shogunate, the official figure was 280,000 koku (traditional unit of measure used for rice), but in reality, it was said to have had the financial wealth of 400,000 koku. It is also famous for the story of the Byakkotai (legendary reserve unit that fought in the Boshin War; comprised of teenage samurai who were the sons of Aizu samurai). It is a place that values Bushido (samurai code of honor).

“Jyu” A rule of discipline of children of the Aizu domain

I talked with a shopkeeper at a rice cracker shop in Kitakata about the discipline of children of the Aizu domain; in short, the rules of “Jyu.” In Aizu, children between the ages of six- and nine-years-old used to form a group of about 10 people called “Jyu.” Every day, the elders of the group would check to see if the members were following the rules properly. There were eight rules in total. The last rule stated that “what should not to be done must not to be done,” and it is said that those who broke these rules were strictly punished.

From the Aizu-Wakamatsu Interchange, I drove east on the expressway with Lake Inawashiro on my right, and headed from Nihonmatsu City to Mt. Adatara. I spent the night at Dake Onsen on the hillside of Mt. Adatara, and the next day, I ascended the mountain.

I took the aerial tramway from the ski resort to the summit and back in about three hours. Mt. Adatara is a volcano, and during the Meiji era, a huge eruption occurred, so there are rough rocks strewn all over the mountain. From the summit, I headed toward Numajiri, and came to a place that smelled of sulfur and looked like a crater on the moon. Some people have suffered gas poisoning from walking around there, so extreme caution is recommended. The view from the top of the mountain was exceptional. I saw Nihonmatsu City below.