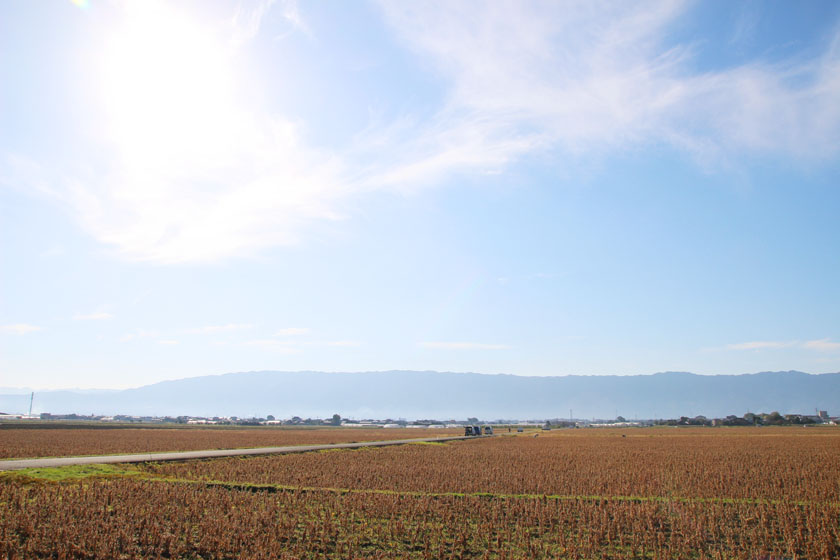 Fukuoka in Kyushu is one of my favorite destinations, and I have enjoyed many trips there.

Kyushu is a very interesting place.

A beautiful original landscape of Japan: view of the Chikugo Plain from the Mino Mountains

One of the sceneries I enjoy the most is the view of the Chikugo Plain from the hillside of the Mino Mountains. The green Mino Mountains rise up like a folding screen behind the Chikugo Plain, which spreads out endlessly before your very eyes. It is the kind of scenery that is hard to find, even if you were to travel all over the world. It serves as a beautiful original landscape of Japan. However, traffic is a bit inconvenient, so I always rent a car or take my own vehicle when I go there.

From Fukuoka City, I took the Kyushu Expressway; exited at the Kurume IC; and headed towards Tanushimaru on Route 210. Upon entering the town of Tanushimaru, I stopped at the 320-year-old Wakatake Sake Brewery. The brewery was built in the Genroku era (1688-1704), and is still in use today as a sake sales facility.

Not long ago, they used to serve country-style lunches using local vegetables in the building next to the brewery, and I went there several times to eat. I was told that it is no longer in operation, but I hope it will be revived.

I often saw the World Azalea Center, as well as azalea-related buildings nearby. I didn’t know this when I was in Japan, but Kurume is the world mecca of azaleas, and “Kurume” is also the name referring to azaleas, as known all over the world.

When I went to see the azalea exhibit at a botanical garden near Sydney the other day, I was impressed to see the name “Kurume Azalea” written on the name tag. Other Japanese plants that are famous in foreign countries include the camellia and maple. I have heard that many people go to Japan to see these plants.

The Chikugo Plain is a place where agricultural product cultivation has prospered, and fruits and vegetables from there are shipped to the Fukuoka market, every morning. At the foot of Mt. Mino is Tanushimaru, where Kyoho grapes were first cultivated, and there are many grape trellises, as well as pear trees planted nearby.

The farm road called Yamazuto-no-michi is a nice thoroughfare that winds around the mountainside, and many orchards, stylish cafes, galleries, and restaurants are scattered around the area. Along the road is a large burial mound called the Tanushimaru Otsuka Burial Mound, and the view of the Chikugo Plain from there is spectacular, suggesting that a powerful clan once ruled the land, as a key point of this area.

After traveling down the road, I hit Route 52, near the town of Ukiha. It’s a bit of a detour, but there is a store called “Ukiha no Yamacha” in Ukiha Town, where you can buy home-grown organic and pesticide-free Japanese tea. It is quite difficult to grow tea organically without pesticides, and this is one of the few organic tea farms in Japan.

Hoshino Village is famous for its cultivation of a type of Yame tea known as gyokuro (“jade dew”), and the scenery of the tea farms on the mountain slopes is magnificent. When I visited, it was the middle of May, the season for fresh tea. It happened to be the time of year when several factories were fire-heating the tea, and the valley was filled with the fragrance of it. What a wonderful time. I highly recommend visiting Hoshino during this season.

There are probably about 10 tea shops. I went to a few of them, and bought tea for souvenirs. This is really a tea village. I stopped by Kiya Hoyuen owned by the Kiyas, one of my favorite tea shops. It’s a stylish place with a cafe, but the main attraction is the tea tasting room. When I went there 10 years ago, and tasted genuine gyokuro for the first time, I was astounded. To sum it up in one word, it was wonderful.

On the way back, I went down the road along the river, through Yame, and on to Fukuoka. Along the way, there was a store owned by an old woman who makes miso; a factory that makes kyogi (thinly shaved wood sheets, used as wrapping for rice balls and other foods) from ginkgo trees, and a very stylish Japanese restaurant called Mizunona. If you visit this area and time permits, I would recommend that you wander around Yame, which has the atmosphere of an old street town.