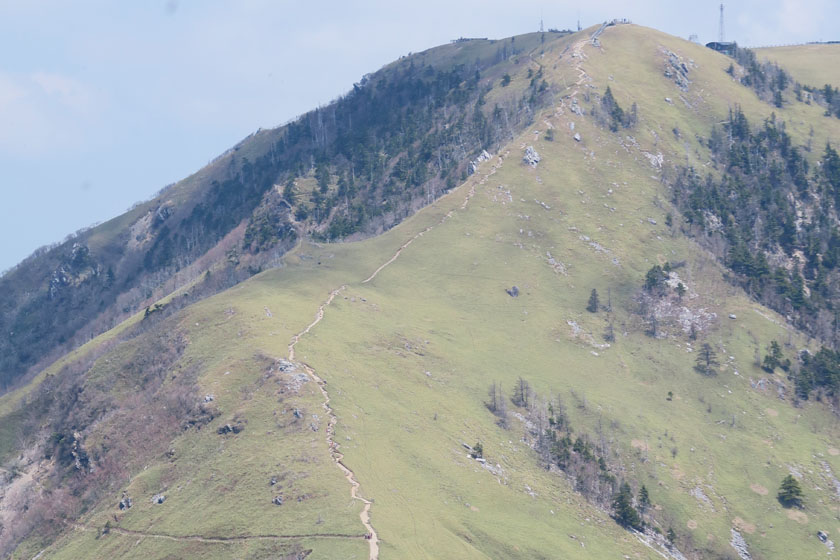 After leaving Muroto, I returned to Kochi City, and took the highway from Nangoku City to Iya in Tokushima Prefecture. I had read a book called “Lost Japan” by Alex Kerr, and was curious about Iya, the unexplored region of Japan.

A traditional Japanese inn you can enjoy vegan food

I turned right from Oboke on the Yoshino River, and crossed the river to my lodging for the night, Kuh Neru Asobu (meaning, “to eat, sleep, and play”). The inn is a remodeled traditional old house on the outskirts of the village, and serves vegan food.

It is located in an inconvenient location, and has only three tatami rooms, but it was full of foreigners. There is no bath, so the staff drove us to a nearby hot springs, a very relaxing place.

For dinner, everyone gathered in the tatami room at a set time and ate together, but I was the only Japanese person, and the rest were foreigners. We chatted in English, of course.

The food served was vegan, with no meat, fish, or dairy products. I had imagined (Japanese-style) vegetarian cuisine, but most of the dishes were Western-style, and at the end of the meal, a cheesecake made of tofu and apple juice was served.

There are fascinating people in rural Japan

In the kitchen, a group of young Japanese women were happily preparing a meal, buzzing about, and when I inquired later, they told me that people who want to learn vegan cooking go there to live, train, and help out.

I talked to the owner of the restaurant, and he told me that he originally entered the culinary world to heal his own body, and arrived at veganism. He is now a respected businessman who has been entrusted with the management of a business hotel in the city due to his capabilities. The countryside in Japan is full of fascinating people.

During dinner there, I had a great conversation with a couple, sitting in front of me; the wife was Chinese, and the husband was Australian. During conversation, we touched upon a topic that made me realize they might be acquaintances of my wife. So, I asked the husband if he was the one who had worked with her, and I hit the nail on the head. In that moment, I felt how truly small this world is.

The next morning, I took them and a tourist from the Netherlands in my rental car, and we went to Iya Onsen in the unexplored Iya Valley, which was recommended by the owner of the inn. We took the cable car down to the bottom of the valley to take a dip in the hot spring, and to be honest, I wasn’t expecting much, but it was great. The water is low in temperature, contains a lot of carbonic acid with a slight scent of sulfur, and gushes out of the ground. A river runs beside the hot spring, and visitors can enjoy at leisure. I highly recommend it.

This is a place where you’ll see many signs that say “unexplored region.” It’s true that the river is green, the mountains are deep, and there are some houses nestled on the slopes of the mountains. However, there were also many concrete buildings, souvenir shops, and abandoned houses in some areas, perhaps due to overdevelopment during the bubble economy.

I parted ways with the others at the hot spring, and headed for the destination of the day, Mt. Tsurugi (which means “sword”). I drove deeper and deeper into the mountains, past a village where there were no people. Instead, what I saw were creepy-looking scarecrows, that were like doll figures of children and elderly people basking in the sun. I was unable to reach my destination.

Along the way, I picked up a hitchhiker, and arrived at the trailhead. It appeared that he had left his car at the point where he planned to go down the mountain, and was hitchhiking from there, while walking along the road.

Mt. Tsurugi is the second highest mountain in Shikoku (about 2,000 meters). As the name implies, I imagined it to be a sharply pointed mountain, but it is actually more gently sloped, and there was a chair lift waiting for us at the trailhead.

A story of a car key

From the chair lift landing, I hiked to the summit while chatting with him. Then, we parted ways, as he was planning to stay at a lodge beyond the summit. I felt the two- to three-hour hike was very good, with scenic views and easy walking. Incidentally, there is a big pointed rock sticking out near the summit, which I heard is the origin of the name “Mt. Tsurugi.”

As I descended the mountain and returned to my car in the parking lot, I noticed that a car key was on the passenger seat. Realizing it must have belonged to my hitchhiking friend, I started to panic a little, as there was no cell phone service deep in the mountains. He was staying at a lodge tonight, and I had no idea where his car was parked.

However, I remembered as we were walking, he had mentioned that he was taking a mountaineering trip from his home in Yokohama, using his Land Cruiser.

From that point on, I searched for his Land Cruiser. After about 20 minutes of driving back down the road, I found a large parking lot on the side of the road where I spotted a Yokohama license plate. Thinking that this would be a sure thing, I hid the keys in a place not immediately obvious, and left a note on the windshield wiper with my cell phone number. It was like a mystery novel. The next day while I was driving, I received a call from him.