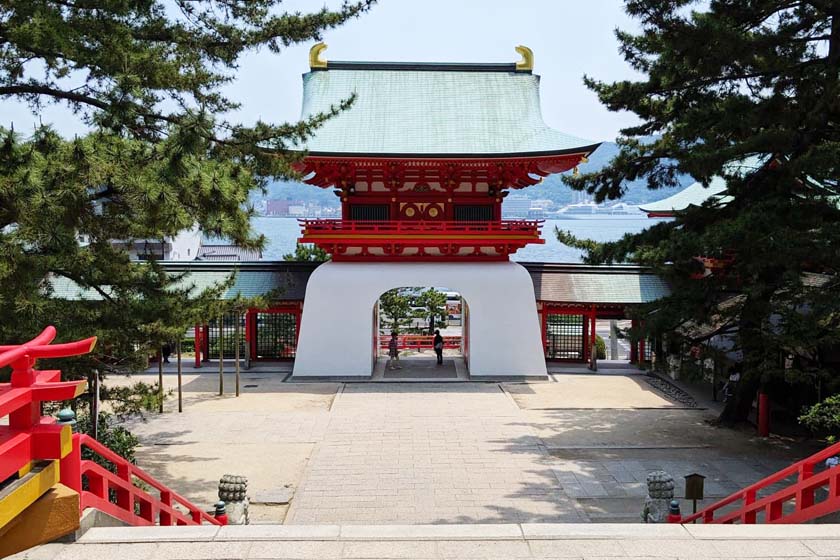 On a sunny day, I went to Chofu with a friend of mine. Choufu is a castle town in Yamaguchi prefecture. We went there by JR train and bus. First, we got a map and all the information we needed at the Chofu Tourist Information Center.

We headed to Inomiya Shrine through the tranquil townscape of the former castle town. It’s located at the place where Emperor Chuai and Empress Jingu built Toyoranomiya palace and lived for 7 years before establishing one domain of western Japan that resisted the Emperor in ancient times. They and their son, Emperor Ojin are enshrined here.  After paying a visit to the shrine, we went to the restaurant named Miyanouchi Saryo at the side of it. I recommend their lunch because you can enjoy delicious Japanese food at a reasonable price with a beautiful garden view.

The next stop is the Chofu Mouri Residence. An alley with Neribei (mad and tile wall which is topped with tiles) called Furue alley is the place you can feel the atmosphere of this castle town. Go along it to Mouri Residence.

In front of the magnificent gate, there is a bronze statue of the first lord of the Chofu domain, Lord Mouri Hidemoto. The main building, built in 1903 by the last lord of the clan, Mouri Mototoshi, is a massive samurai residence with a Japanese garden surrounded with white walls which gives the house a tranquil feel. The rooms are very relaxing. Each room is decorated with seasonal flowers, which will sooth your soul. The room where the Emperor Meiji stayed has been left intact. You can enter it freely, and enjoy the view of the pond with a strolling garden and Karesannsui (dry) garden in front of it, while enjoying the feeling of being a lordly man.

In the exhibition room you can see pictures of the descendants of the Mouri family, who lived here until 1919. For an additional 400 yen, visitors can enjoy a complimentary cup of green tea and Japanese traditional sweets.

Kozanji Temple with its magnificent double gate is not far from Mouri Residence. It stands quiet, hiding the rise and fall of history. We can visit it freely. It is one of the oldest Zen temple building in Japan and a beautiful national treasure.

Nearby is the Shimonoseki History Museum and if you’re interested in history, it’s a must-see place. There are detailed exhibits on the early modern period and on Choufu at the end of the Edo period.

We returned to the Tourist Center along the Dangu River. Walking along the quiet and elegant house-lined path, we found a nice cafe and took a rest. The entrance of this shop called Siki-niwa meaning four season garden, looks like a traditional Japanese building and the garden is also Japanese, but table seating is in a modern space with a wide glass window looking out over the garden. I said to the owner, “There are a lot of big houses around here, aren’t there?” He told me that this is because the houses have been passed down from generation to generation by the descendants of samurai from long ago, and each house is more than 990square meters in size.

After getting some souvenirs at the Tourist Center, we headed to Chofu Garden by bus. It’s a place we garden lovers come to expect. It is the former residence of Nishi Yukinaga, a retainer of the Chofu Mouri family, and covers an area of about 31,000 square meters. It’s a strolling garden with a tall mountain in the background. In the garden you can enjoy the seasonal flowers. Chery blossoms and azaleas in spring, lotus in summer, autumn leaves in the fall, and snowy scenery in winter are also picturesque. It’s one of my favorite gardens to visit all year around. We spent about one hour wandering around and taking pictures.

After 30 minutes we reached Akama Jingu by bus. The bright vermilion lacquered gate is reminiscent of the Dragon’s palace in a fairy tale. The shrine, which overlooks Dannoura Inlet, houses the gravesites of the Heike clan. A wooden statue of “Houichi the Earless” famous for the ghost story by Lafcadio Hearn, is enshrined here. There is also a hall of treasures, including a picture of the Genpei War and other valuable documents. The ground of this shrine is open to visitors. This is a popular place for young people to visit because of its photo-worthy location. It was a full day of sightseeing.