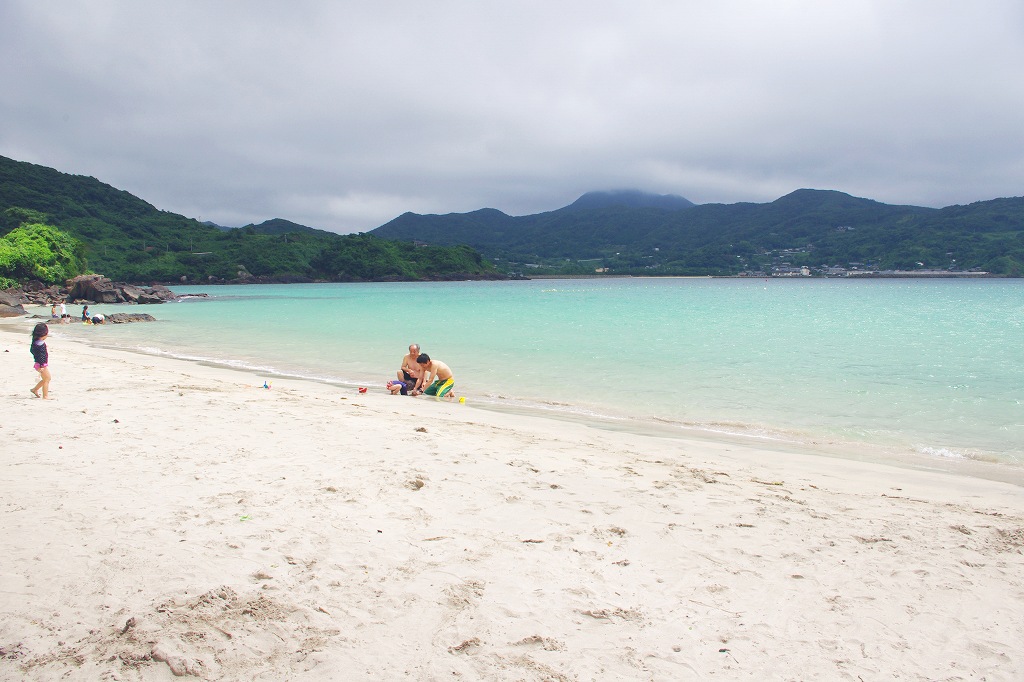 A trip to find a beautiful beach

Hitotsuku beach – one of the best beach in Kyushu

The first purpose to visit Hirado in Nagasaki was a beach, Hitotsuku beach. It was quite a beautiful beach even though the weather was not so good, that is to say mostly cloudy and partially sunny. Moreover, around the beach remains original scenery of Japan or the atmosphere of the countryside and appeals travelers’ sentiments.

The beautiful emerald ocean and white sand beach. It is also famous for the beautiful sunset. It is a bathing resort, which is not crowded because of a little-known great spot.

Bathrooms, showers, and a restaurant are available during sea bathing season in summer. You enjoy a lot of nature.

Unfortunately there are no public transportation available. Therefore a rental car or taxi should be used to go there. It takes about 30 minutes from Hirado-Ohashi.

A red 665 meter suspention bridge, which is 30 meters above the sea. The bridge connects Hirado island with mainland Kyushu.

A photographer, Mr. Satoshi Kuribayashi is from Tabira town in Hirado city. Mr. Kuribayashi is world-famous for wildlife photos especially of insects.

I have seen many pictures of insects taken by him. Mr. Kuribayashi won the Lennart Nilsson Award in 2006, which is regarded as a Novel Prize of science pictures.

Not only children but also adults can enjoy observing a lot of insects living in the park.

Hirado had relationships with European countries such as Portugal and Holland in trade during the 16 to 17 centuries.

Christianity spread in Japan after Francis Xavier came to Hirado in 1550. After that, Christianity had been banned during the 17 to 19 centuries but it was believed secretly in Hirado.

Still now people have kept their belief and 10 percent of the people in Hirado are Christians. There are 14 Catholic Churches there.

The church made of red bricks was built in 1915. I have never seen such a beautiful church!

The green and white colored Gothic style, Hirado St. Francis Xavier Memorial Church was built in 1913 as the Catholic Church of Hirado, 100 meters west of the present location. It was later built at its present location in 1931.

This is one of the sightseeing spots representing Hirado, which is a very beautiful church. You can enter the church, but please observe good manners as it is a religious facility.

Himosashi Church is one of the larger Catholic churches in Hirado. It was the largest church in Japan until the old Urakami Tenshudo in Nagasaki City was destroyed by an atomic bomb and rebuilt.

The outside of the building has an overwhelming appearance. You will not find a better Romanesque church in Japan or any other Asian country.

It was built by an architect, Yosuke Tetsukawa, who is known as the father of church architecture. He worked on many Catholic churches in Kyushu, mainly in Nagasaki and Kumamoto, including Catholic Urakami Church, Tabira Catholic Church mentioned above, Sakitsu Church, Oe Church, and Imamura Chatholic Church.

The interior of the church is beautiful with arches on the ceiling and floral decorative patterns that are characteristic of Yosuke Tetsukawa. The church is also spacious with few pillars. Since he was also a Buddhist, the church also has Buddhist elements.

Its stained glasses are beautiful. A structure of the church is unique among churches in Hirado.

This was built in 1718. A view from the castle tower is wonderful. You can see all over the city and look at as far as Iki Island

This is a large warehouse which was used for trade with Holland in the past.

This is a small port which is famous for a location for a film. It is exactly said it is original scenery of Japan.

This is a grassy plain, which commands scenery of the beautiful islands in the sea.

This is high grade Japanese beef featuring with a distinctive sweet taste.

This is a kind of Ramen noodles with stock made from flying fish, which is a local product in Hirado. Soup of the noodles has superior taste!

How to make was instructed by priests from Portugal coming to Japan in the 17th century. Now it is a sweet representing Hirado.

This ryokan, Japanese inn has rooms with beautiful ocean views. However, there is something more wonderful in the hotel. That is incredibly delicious food served as much as you cannot eat all. When I stayed here, I was served with Japanese flounder sashimi, big Japanese spiny lobster, Hirado beef and others, which were too much to eat all.

There are a lot of must-see sights in Hirado.