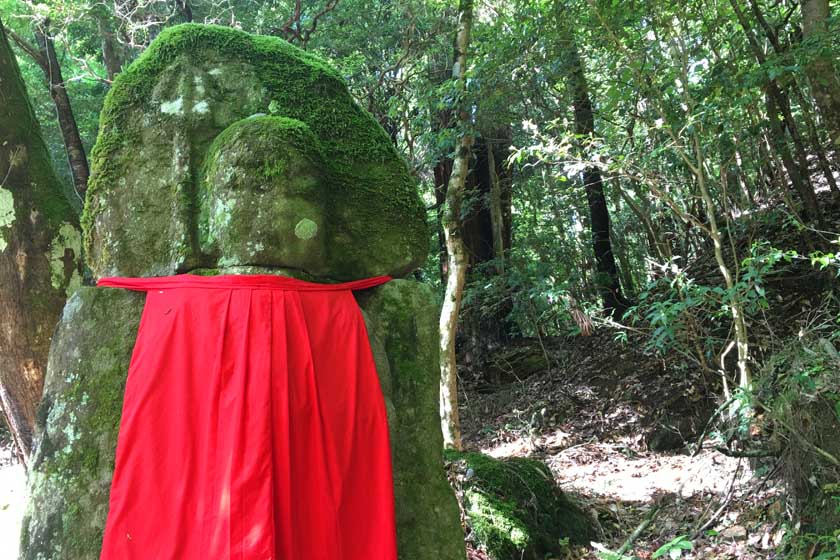 I took the JR Sakurai Line from Miwa Station, back to Nara Station.

After getting off at JR Nara Station, I walked through the shopping street in the old town of Nara (Naramachi) to the Kamunabi Guesthouse, where I planned to stay that night. There used to be nothing special about that shopping street, but now there are more and more stylish food shops that have been converted from old traditional town houses, and it reminds me a little of Kyoto in the past. The stores in Kyoto nowadays are a bit flashier and more crowded, which I’m not fond of, so Naramachi was just right for me.

Shops of inkstick and mosquito net

Some of the stores are really old, and one of them is the sumi ink (inkstick) shop, Kobaien. It was established more than 440 years ago, and the atmosphere is austere, but when you enter the store, you will see many customers buying ink.

There is a place in the garden where they collect the soot to make the inksticks. It is amazing to see how many burning candles are required to produce the soot. A while back, they used to casually show this part of the shop, but it seems that they no longer offer those tours.

Another interesting store I found was a mosquito net store. I didn’t think there was a place in Japan that made mosquito nets anymore, but there it was.

In the center of Naramachi is Gangoji Temple. The temple is not very big now, with only a gate and the ruins of a pagoda, but it was originally Asukaji Temple in Asuka, which was moved to Nara when Heijo-kyo was built, making it a very historic temple. It has become obsolete since the Middle Ages and has an ancient history.

Amidst this townscape is the Kamunabi Guesthouse, a remodeled old traditional-style house. The price is not too expensive; it’s clean enough, and suitable for a single person to stay.

The next morning, I woke up early and walked to Yagyu, the main purpose of my trip. I walked along the path in front of the guesthouse, looking to the left at the Kasuga Taisha forest, all the way to the east, and after a short walk up the hill, I came to a mountain path. This is the famous Takizaka path, which was walked by Yagyu Jubei (samurai) in the Edo period. I hike often in the mountains, but for a hiking path, it is especially beautiful as it runs along a ravine.

A tea house on a mountain pass

There is a Kubikiri-Jizo (“Beheaded Buddha”; found throughout Japan, these stone Buddha statues serve as protectors of the departed souls of those who have been executed) and other interesting things to see along the way, creating a unique atmosphere. Up the hill, and after a short walk along a paved road, there is a teahouse located at the pass. Could it have been built in the Taisho or Showa era? There was an elderly man in the teahouse with his cat.

I talked to him, and he told me he was the owner of the teahouse, and that I should eat the kuzumochi (gelatinous cakes made from powdered starch) he had made. The price was 800 yen for a small plate, but I was willing, as I enjoy those kinds of opportunities to have a positive exchange. He told me that he digs up kuzu (root of kuzu tree) nearby, and grinds it into powder to make the kuzumochi. I felt like I was transported back 50 years, to the Showa era.

From there, I walked for a while, and came to Enjoji Temple. The garden is beautiful, with a pond as its main feature, surrounded by beautiful plants to create a well-composed setting. The temple was founded in the early Heian period (794-1185), and there are Buddhist statues and buildings that have been designated as national treasures. Next to the temple, there is a restaurant called Sato, where I had lunch.

From there, I got back on the mountain road again, walked down the slope until the road opened up in front of me, and came to a village. It was Oyagyu. I still had a long way to go before reaching Yagyu, and from there, it was a walk through several villages and rice fields. Finally, I arrived at my destination, the village of Yagyu. It takes about three to four hours to get there from Naramachi.

Visit to a Yamato tea grower

In Yagyu, I visited the home of a farmer who is a Yamato tea grower. There are many tea farmers in Japan, but not so many who grow it full-time. The house is located on a hill overlooking the village of Yagyu, a truly beautiful place.

He is trying to create his own brand and sell directly to consumers, instead of just wholesaling to agricultural cooperatives, which is how we became acquainted.

To get back to Naramachi, a local bus can be taken; there are only a few buses per day, but they will take passengers to Nara Station without any problem.