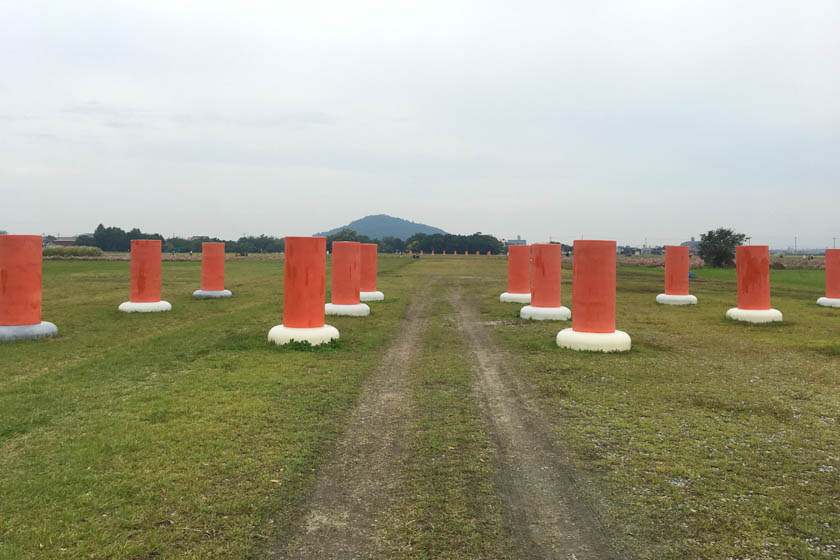 I took the JR Sakurai Line from Miwa Station, and got off at Unebi Station. From there, I walked to Kintetsu Yagi Station, rented a bike at the information center, and took the path along the Asuka River to visit Asuka Village.

Before entering Asuka Village, there is a large hill (small mountain) on the right, which is Amakashi Hill. This is where Soga no Umako (powerful leader of the Soga clan) and Emishi (indigenous people of northern Honshu) are said to have had their residences in the past, and where the village of Asuka can be seen to the lower right. It was the best place geopolitically for those in power. To the left, the ruins of Fujiwara-kyo and the three surrounding mountains of Yamato can be seen, making it a place with a great view.

The rulers observed the country from the hill. It is the very place as described in Manyoshu poetry, where one can see the scenery extending below; that is to say, one can really feel that Yamato is a basin surrounded by lush mountains. Those who were in power during ancient times must have climbed up there to observe the land. It creates the feeling that Yamato extends to the ends of the earth.

Bicycles are a great way to see Asuka Village

After descending Amakashi Hill, I cycled to Tachibana Temple, where Prince Shotoku is said to have resided; and to Asuka-dera, the oldest temple in Japan of the Soga family; and to Ishibutai, which is said to be the tomb of Umako. I had lunch at Cafe Kotodama, in a remodeled old house.

The village of Asuka is also a historic preservation district, and the atmosphere of the old days has been well maintained, making it a fun place to walk around. However, it is also quite hilly, so to explore everything in a day or two, a bike is the right choice.

Kitora Ancient Tomb: you can see the real thing

At the café, I happened to learn that during this period you can visit the interior of the Kitora Ancient Tomb at the northern end of the district, so I took a 30-minute bike ride to the site. The tomb is managed by the government, and the facilities are excellent. I was thoroughly impressed when I entered the tomb, and saw the Big Dipper and other paintings on the plaster surface. Last time, I went to Takamatsuzuka Tomb, but unfortunately, I was only able to see a replica of it. This is the real thing, and one can truly experience the aura of it.

The bike ride back was entirely on a downhill slope, and it was comfortable. I came back to Amakashi Hill again, and took the bike path along the Asuka River to reach Yagi Station. I stayed at the same place, Miwa Guesthouse.

Walking around the ruins of Fujiwara-kyo,

The next day, I walked around the ruins of Fujiwara-kyo, which could be seen from Amakashi Hill on the lower left. One of the poems of Manyoshu (anthology of waka poems) written by Empress Jito is, “Spring has passed, white summer robes are aired out on Mt. Amanokagu, down from the sky.” This trip was the first time I was able to see the mountain in all its glory.

Originally planned by Emperor Tenmu as Japan’s first full-scale capital city, Fujiwara-kyo was modeled after the Tang Dynasty capital of Chang’an. After the death of Emperor Tenmu, his wife, Princess Uno, ascended to the throne and became Empress Jito, who built this city.

Try standing on the ruins of Fujiwara-kyo. The three mountains of Yamato (Yamato Sanzan) are located nearby, on the west, north and east, and you can see the distant mountains to the south.

There are signs marking the site of where the palace stood. From there, one can look at Yamato Sanzan and the Aogaki (mountains in the distance) behind them, and feel like Empress Jito. It is the perfect place to experience Yamato’s “Mahoroba”, which means “Yamato is beautiful.”

Hiking the mountains of Yamato

After exploring the ruins of Fujiwara Palace, I had some time left, so I decided to make my way to all three of the mountains of Yamato. It is relatively easy to ascend all the low mountains in about 2 to 30 minutes, and move from mountain to mountain, by bicycle.

I started with Mt. Unebi, which is next to the Kashihara Shrine and Emperor Jinmu’s Mausoleum, then went to Mt. Miminashi. The last mountain, Amanokagu, is probably the most famous of the three Yamato mountains, and there is a small shrine at the foot of it, which adds to the atmosphere.

Mt. Unebi and Mt. Miminashi are typically shaped small mountains, but only Mt. Amanokagu has a peculiar shape with a gentle slope, like the hem of a skirt. From the top, one can look down on the ruins of Fujiwara-kyo, which is probably the best view from Yamato Sanzan. During the Asuka period, Emperor Jomei climbed there to view the country, and left behind a famous poem:

“In Yamato, there are countless mountains, but if one travels up to heavenly Mt. Amanokagu and observes the land, smoke rises from the country fields, seagulls fly over the ocean, and Akizushima (land of Yamato) is splendid.”  (Manyoshu No. 2)

I think only after coming here can one fully realize the meaning of this poem.