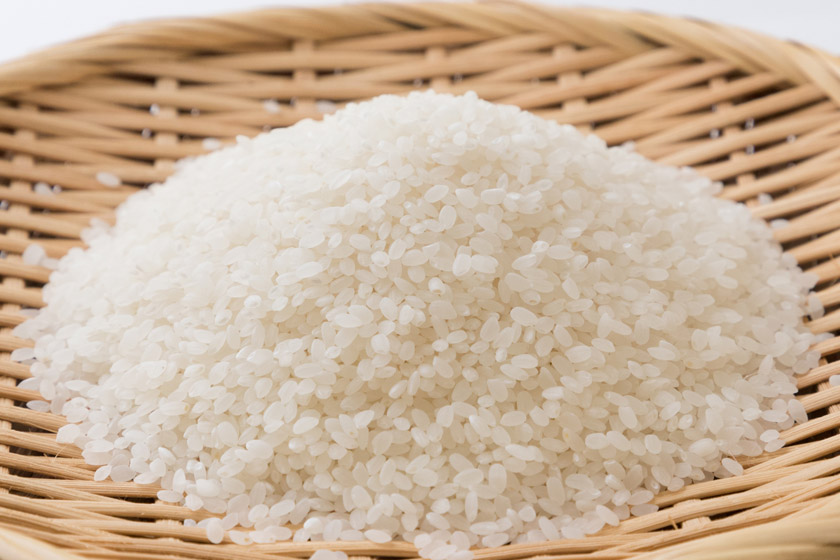 Do you eat rice? Ever since I was a little child, I have always loved rice, and eaten only rice, rather than side dishes. I loved the days when rice was served for lunch at my elementary school. I remember hot rice was served in an aluminum case with a lid. Even now, as an adult, I still need rice, every day. The aroma of freshly cooked rice makes me especially happy, no matter how many times I’ve eaten it.

In addition to the aroma, the delicious taste of the rice cannot be overlooked. Chewing the rice brings out its sweetness. This is because the starch in the rice combines with the digestive enzyme amylase, which is present in saliva, and breaks down into a sweet sugar called maltose. This is the reason why it tastes sweet.

One of the times of the year that I look forward to is the new rice crop season that starts around September. Whenever I see a bag of rice with a “new rice” sticker on the package, I go straight to the rice section, happy to know that the season has finally arrived.

How long has rice, an indispensable food for the Japanese, been produced? Fukuoka Prefecture has long been a gateway to various cultures and products from around the continent (China and Korea). Rice was first introduced to Fukuoka around 2,000 years ago, and even today, Fukuoka is one of the leading rice-producing prefectures in western Japan. Rice was already being grown in Fukuoka in the late Jomon period (14,000 – 300 B.C.). As proof of this, carbonized rice has been excavated from the Itazuke Ruins.

The Itazuke Ruins are located in Itazuke, Hakata Ward, Fukuoka City. It looks a little strange because there are apartment buildings around it. In addition to the ruins, rice paddies from the Yayoi period and pit dwellings, the homes of the people from that period, have been reconstructed. At the site is the Itazuke Ruins Yayoikan (museum), where tools used by the ancient people have been restored. I’ve seen them in history textbooks, but seeing the actual Yayoi earthenware and fire-starting tools makes me feel like I’ve slipped back in time.

Each planted area is comprised of a certain variety of rice. First is “Yume Tsukushi,” followed by “Hinohikari,” and then “Genki Tsukushi.”

Do you know the origin of each name? The name “Yume Tsukushi,” which has the largest crop area, is derived from the word “Tsukushi,” taken from “Tsukushi no Kuni,” referring to the land in the northern part of Kyushu, and combined with the idea of “tsukusu,” meaning “to serve the people.”

Next is Hinohikari. The name “Hinohikari” is derived from the Japanese word “Hi” (sun), which represents Kyushu, and the wish for the rice to shine and be delicious.

The youngest rice, “Genki Tsukushi,” is meant to be a delicious rice that “grows up healthy and makes the people who eat it healthy, too.”

The name of the rice suggests that it has been carefully cultivated.

It took a lot of time and effort for the rice to appear on the market. Fukuoka Prefecture has a long history, not only in cultivating rice, but also in breeding it. A hybridization method was implemented in 1912, and by 1941, four varieties had already been bred. The project was suspended during World War II, but even thereafter, the goal was to increase the production of existing varieties. Entering into the 1980’s, it was still mainly high-yielding varieties* that were being produced. As a result, rice produced in Fukuoka Prefecture was not highly regarded.

* High-yielding varieties: Varieties that produce a lot of brown rice, with little emphasis on taste.

However, there was a turning point; the emergence of “Akitakomachi” rice, grown in Akita Prefecture in northern Japan. This was the debut of a variety with a unique regional flavor. As a result, in 1988, Fukuoka Prefecture began to focus its efforts again on breeding new varieties.

Around that time, the area planted with “Hinohikari,” a rice variety with good flavor quality, was exceeding expectations in Fukuoka Prefecture at an unimaginable rate. Even under such circumstances, new varieties were starting to be cultivated. This is where “Yume Tsukushi” was born. It normally required 10 to 12 years to produce this new variety, but only took 5 years to develop in this region. In addition to Fukuoka Prefecture’s previous experience in crossbreeding, this was the result of a great effort put forward.

“Yume Tsukushi” has “Koshihikari” as its father, and “Kinuhikari” as its mother; to offset “Koshihikari’s” tendency to fall over, “Kinuhikari” is easy to cultivate. “Yume Tsukushi” has also been incorporated into school lunches, and in 2014, it even became more in-demand and surpassed the planting area of “Hinohikari,” which was said to be the Yokozuna (grand champion) of the west.

Although the area was thought to be in safe hands, nature proved to be difficult to control. Only 10 years after the birth of “Yume Tsukushi,” a problem arose. Since around 2003, the appearance quality of the rice deteriorated due to high temperature damage.

Fukuoka Prefecture did not give up at this point. In order to improve rice that is resistant to high temperatures, a facility was built to create a high temperature environment; then, breeding was begun on a variety that has good taste and can withstand high temperatures.

“Genki Tsukushi” was born from “Chikushi No. 64” (Tsukushi-roman), which was expected to be a tasty rice; and “Tsukushi Wase,” which is resistant to high temperatures and is a good quality rice. In the second year of production of “Genki Tsukushi,” the average temperature exceeded 29° Celsius (84.2° Fahrenheit). While less than 15% of first-class “Hinohikari” rice was produced, “Genki Tsukushi” secured an astounding 90% production rate.

“Genki Tsukushi” is resistant to high temperatures, and is highly regarded for its delicious taste. The aroma alone of freshly cooked rice is appetizing, but it is also delicious even when it is cold. Therefore, you can pack it in your lunch box, or make it into an onigiri (rice ball) to take with you, and it will still be delicious.

The rice that we eat nowadays is laden with the efforts of many people: the people who improve the rice; the farmers who grow the rice; and the people who milled and transported the rice. That’s probably why the bags of rice are so heavy and near bursting.

Let’s chew and savor the delicious rice of Fukuoka Prefecture, which is filled with the thoughts and feelings of everyone who produced it.