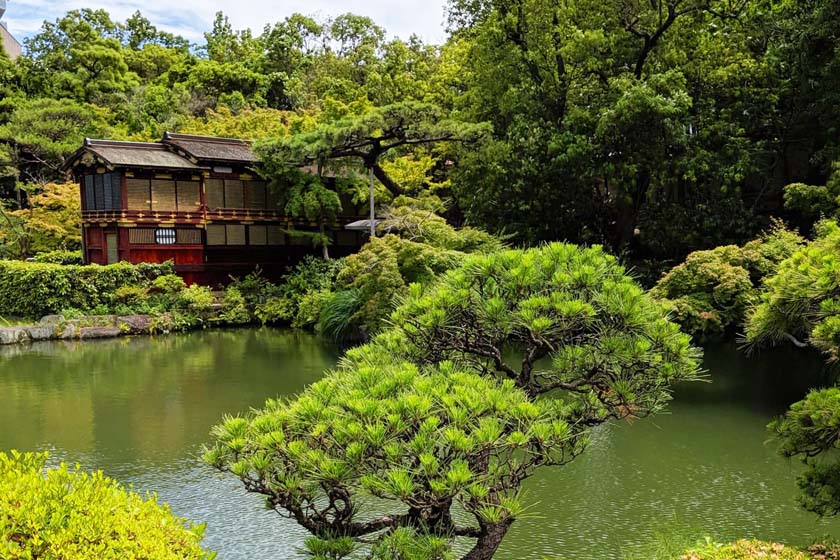 This is a 3-day trip to Kobe. I took the 9:30 am Nozomi train from Hakata Station and arrived at Shinkobe Station at 12:00 pm. I met up with two friends who came from Tokyo.

The transportation system in the city of Kobe is very efficient. Hankyu and Hanshin Railway run alongside JR Tokaido Railway in the city, and the City Loop bus will take you to the main sightseeing spots. A single ride costs 260 yen and a one-day ticket costs 660 yen. There is a lot to see in the compact city.

We headed to Arima Onsen, one of the three oldest hot springs in Japan.Take the Hokushin Express train and transfer at Yagami to arrive at Arima Onsen Station in less than 30 minutes. We stayed at Kosenkaku inn for the first night. If you give them a call, the inn will send a car to pick you up.

It’s a hot spring resort loved by Hideyoshi who was one of the most famous warlords. We had a little rest at the room, and then a leisurely soak in the very good quality hot spring. We were very satisfied with a delicious vegetarian meal that we had specially requested in a pleasant private dining room.

The next morning, after breakfast, we enjoyed the nice hot spring again, and then were driven to Arima Onsen Station by the inn’s car. We shopped for souvenirs at shops near the station. Arima Onsen Senbei (rice crackers) and Arima Cider were available at every souvenir shop.

After arriving at Shinkobe Station, we took the ropeway adjacent to Nunobiki Herb Garden. From the ropeway, we had a great view of the city of Kobe, the port and the sea below. There were many herbs and flowers in the garden whose style reminded me of Europe. We had a delicious lunch of Kobe beef at a restaurant in a Western-style building. At the Scent Museum, you can choose your favorite scent among the 80 types of natural essential oils available. From the mountaintop station to the Kaze no Oka midway station, we had an enjoyable stroll, looking at the various gardens in the area, and at times, the ocean in the distance. Of course, we chatted a lot. After we came back to Shinkobe Station, we took a shuttle bus to our hotel, Hotel Okura. After taking a short break in the room, we went to see the Kobe Earthquake Memorial park near the hotel and went to Chinatown on foot. We had dinner there, wandered around Motomachi a bit and then returned to the hotel.

The next day, we left our luggage at the hotel and went to Kitano town, where many foreigners’ mansions are located, and visited Kazamidori House and the Moegikan House. We walked around each room, imagining the life style of the people who once lived here, far from their hometown. Yokohama, Kobe and Nagasaki have had strong connections with foreign countries since the old times. They have trade ports and western-style buildings from those days. These cities are an exotic mixture of Japanese, Western and Chinese.

It was the first time we had even heard of a Japanese garden here in Kobe, so we visited it. The 19,566 square meter garden, called Sorakuen, is now under the management of the city of Kobe and was built at the residence of Kodera Taijiro, the former mayor of Kobe.

The circular garden has a pond and is lavishly decorated with valuable stones from different parts of Japan. Near the main gate made of zelkova wood, a 300 years-old cycads tree, some cycads brought from Kagoshima by Kodera were planted and blended strangely with the Japanese garden. The western-style stables near the entrance were once used by Kodera. The nearby house was built in the Meiji era (1868-1912) by Mr. Hassam, an English trader, and was moved here from Kitano town to preserve it.

In this garden there is a building called Soraku-kaikan, which is used as a wedding hall with a restaurant inside, so we went in. There was a lobby that looked like a first-class hotel and a restaurant with a view of the garden. The staff was sophisticated, and we had an unexpectedly elegant lunch. After lunch, we continued to take our time looking around the large garden. The twin buildings of the Hyogo prefectural Office rises just around the corner. It was amazing to find such a quiet and serene place in a city with lots of modern buildings. According to the receptionist, not many tourists come here, so I thought it was one of the best places to visit in Kobe.