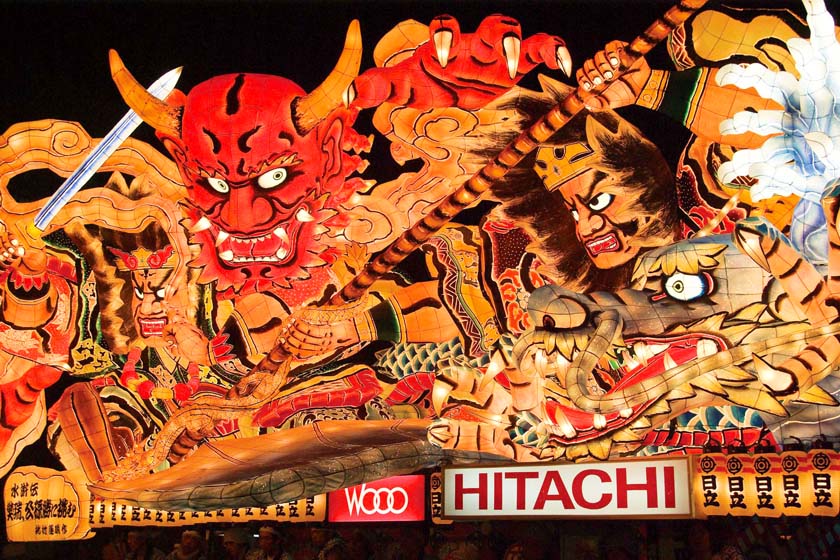 Most fascinated by the works

The Aomori Nebuta Matsuri is a traditional festival held every August in Aomori City. It is a nationally famous festival, and the city bursts with a festive mood, crowds of participants in their Haneto costumes, and those who have come to enjoy the Nebuta (lantern floats). The buzzing atmosphere is also part of the fun.

Both sides of the road, where the Nebuta pass, were packed with people. As we waited anxiously for the Nebuta to arrive, the lively shouts of “Rassera, Rassera,” together with flutes, drums, and hand gongs, could be heard as they approached our way. Even though this was the first time I heard the music, it somehow gave me a nostalgic feeling, as if I had heard it a long time ago.

The music built up my excitement, as I wondered what would occur next, and then… there they came. The soft orange glow of the Nebuta were like paper lanterns lighting the pitch-black night sky. The light was not glaring, but added to the depth of the Nebuta. I gazed up at the Nebuta, which were many times larger than me, and they looked amazing and powerful. When I saw them, I got goosebumps. They looked as though they were alive, with eyes filled with soul, and I thought they might very well come down from the tops of their platforms. Of course, there were all kinds of cute creations, as well as gods, but I was most fascinated by the works that displayed power.

In spite of their heavy weight, the Nebuta are turned around and maneuvered so spectators can see them up close, and feel their power as they draw near. Since the pieces can be seen in their entirety, spectators will be able to notice the beautiful three-dimensional curves, variety of colors, and intricate details, making them truly moving works of art.

The story of the Nebuta Matsuri is that it was originally a combination of Aomori’s “Shoronagashi” (ceremony in which participants float glowing paper lanterns down a river to commemorate the souls of the dead), and the “Tanabata Festival” (also known as the Star Festival; based on the legend of the once-a-year meeting of the stars Vega and Altair), which was introduced from China during the Nara period (710-794).

The Nebuta are painted every year, based on a historical theme. Even the rough sketch, in itself, is a work of art, as it is drawn and colored down to the smallest detail, from the tips of the fingers to the patterns on the kimono.

Based on the rough sketches, each section is created, one by one. First, the arms, legs, and face. After that, the skeleton is made. It is made of wood and wire. By using wire, the roundness of the body is created, which gives it a more authentic feel.

After that, the lighting fixtures are attached to the inside of the finished framework. Thanks to these lights, a powerful figure emerges in the pitch-black night sky.

The next step is to attach the paper to the skeleton. A bond is applied to the wire, and the paper is stuck firmly to it. When the paper is completely dry, the face and kimono are drawn with ink.

A technique called “wax drawing” is applied, in which the patterns are drawn with melted paraffin. Then the patterns emerge to the forefront in the light. I was impressed by the artists’ attention to detail, even to the point that people might not notice.

Once the face and other parts of the body are drawn in black ink, the colors and patterns of the kimono and obi are added. Thus, the sketch becomes closer to the original drawing.

Nebuta were originally made by people in the town who were good with their hands. It is said that many of them set aside their jobs in order to make Nebuta.

Gradually, more and more skills were demanded, and people known as “Nebuta masters” began to create them. Those with the most advanced skills, and who have contributed to the production of Nebuta for many years, are selected as “Nebuta Grand Masters.”

Between 1958 and 2012, there were only six people known as “Nebuta Grand Masters.” This reflects just how much skill is required, and how difficult it is to be involved in the production of Nebuta for so many years.

Why did the Nebuta event originally begin?

In recent years, events from overseas have been introduced to Japan, and have become widespread. At times like these, I find myself thinking, “Why did this festival event originally begin?”

When I was younger, I used to simply enjoy events and festivals. However, it may be important for those of us living in the present to remember that there are meanings that have been passed down from generation to generation, and to pass them on to our children.

The origin of these Nebuta also comes from “Shoronagashi.” The spirits of the deceased return to their families during Obon (mid of August), spend time with them, and at the end of Obon, they return to the other world through the “Shoronagashi.” In essence, the Nebuta processions represent the floating lanterns that carry the ancestors’ spirits.

I’m sure our ancestors will be able to return to the other world after seeing the majestic Nebuta, the efforts of the many people involved, and smiles on everyone’s faces.

As I watched the Nebuta while listening to the music, I felt as if I had been transported back in time. Next time, I would like to visit Aomori, not to watch, but to participate in the festival, wearing the Haneto costume.