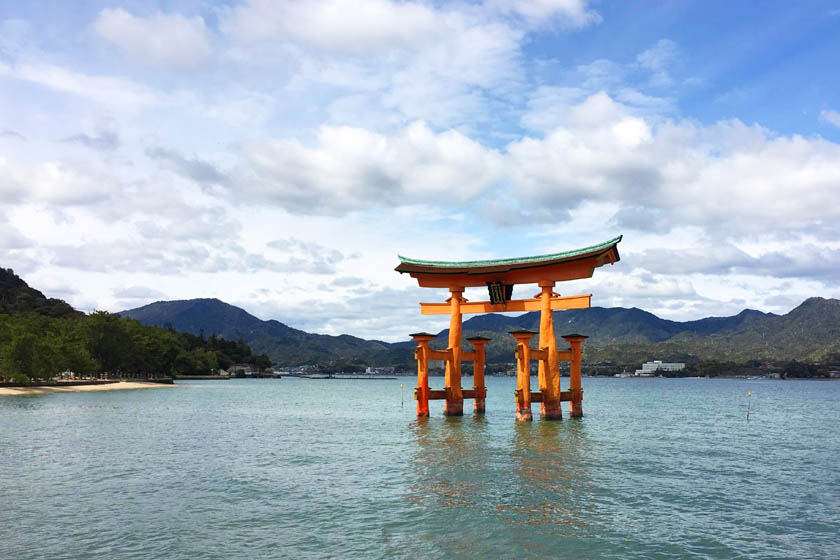 The mystic island ‘Miyajima’ floats on the Seto Inland Sea and is located 300 m away from the mainland. The highest mountain on the island, Mt. Misen, is worshipped as a sacred mountain, as well as the entire island.

The symbol of Miyajima, the Grand torii gate, and the Itsukushima Shrine fascinate people from all over the world.

You will be welcomed by adorable deer with a naughty look on their face upon arrival on the island! Be careful though, please do not touch and feed the deer because they are wild. Your map and paper money might be eaten since they love paper!

Let us introduce six must visit places on Miyajima which is blessed with rich history and nature.

The O-Torii gate or Grand torii gate, at 16.6 m tall, stands with four support pillars. Unbelievably, the lower parts are not buried, but it is directly standing on the seabed! The reason why the gate does not fall is because of its weight of six tons! The Grand torii gate floats in the sea at high tide.

People are enthralled by the impeccable harmony between the blue sea and vivid red gate. It is possible to walk to the gate at low tide, and it is more powerful when you look at it up closely!

The spacious area for tour groups, about five mins walk from the wharf, is the most popular photo spot but it is always crowded.

Do you want to know a quiet spot to take pictures of the gate? You will be taken to the exit of the Itsukushima shrine after worshipping, and you’ll encounter ‘Nishino Matsubara beach’ or the beach with pine trees leading to Kiyomori shrine. You can take pictures of the Grand torii gate from this beach with less people. Little is known about this quiet beach!

*Note:
The Grand torii gate has been under repair from 2019 June. The termination of the work is not decided.

It was founded in 593 and the shrine is dedicated to the three goddesses, Ichikishima, Tagorihime and Tagitsuhime, and worshipped as the goddesses of the sea, traffic safety, good fortune and entertainment.

Tairano Kiyomori who was the most powerful samurai, sincerely worshipped the shrine, and constructed the current Shinden style edifice spreading over the sea in 1168. It was reconstructed many times due to damage from typhoons, but the present style is the same as the original.

The shrine was designated as a UNESCO World Cultural Heritage site in 1996.

One of the three major Benzaiten is enshrined at Daiganji temple, located near the exit of the Itsukushima shrine. Benzaiten is originally derived from India known as the goddess of music, beauty and eloquence. Nine pine trees stretching toward to the sky at the site are so impressive.

You can find the image of a monk called ‘Nadebutsu’ who was an apprentice of the Buddha. People believe that your bad part of your body will be cured by touching the same part of Nadebutsu. The Itsukushima Buddha or the god of fire, at 4.8 m tall, is enshrined in the hall, stands dynamically.

You can overlook a beautiful pagoda from the Itsukushima shrine as well. The height is 27.6 m and built in 1407.

Toyokuni shrine is also known as Senjokaku was half-constructed under a mandatory order from Toyotomi Hideyoshi who was an influential samurai in the 17th century. However, its construction wasn’t finished because of his death. Senjokaku literary means 1,000 tatami mats hall, with an area big enough to place 857 tatami mats there.

This is the oldest temple on Miyajima, founded by the great monk Kukai in 806, situated on the foot of the sacred mountain Misen. It is a prestigious temple with a deep relationship with the Imperial family. There is lots to see at the site.

There are the long stairs stretching to the hall after passing the front gate protected by a pair of Nio Guardians. Uncountable images of Jizo stand underneath the stairs, showing different expressions to each other.

The existence of various images of Buddha such as Kannon with eleven faces are enshrined in the Kannon hall, the most dynamic looking of three different images of Buddha are dedicated to the main hall.

Sanki Daigongen or the Guardian god of the sacred Mt. Misen, and Henkutsudo hall enshrining 88 images of buddha from Shikoku’s 88 sacred places might melt you in the sacred atmosphere.

The sacred mountain Misen is 535 m in height. You can go up to the summit by climbing or going by a ropeway. Let us introduce the ropeway here. It operates from Momijidani station via an intermediate station Kayatani to the final station on the mountain Shishiiwa. You have to change ropeways at the intermediate station. The first ropeway operates every one minute taking 10 minutes, and the next one departs every 15 minutes and it takes about four minutes.

An amazing view of the Seto Inland Sea is waiting for you! After getting off the ropeway, you hike to the lookout on the summit for about 30 minutes. The holy Misen hall and the eternal flame which has been kept burning for 1200 years leading to the lookout will give a feeling of mysterious power to you all.

The ‘Kuguriiwa’ or huge rock which you can thrillingly pass on the way is a great photo spot! Hiking to the lookout on the summit via the ups-and-downs on the hiking path road might be tiring. However, splendid views from there will make you feel refresh and revitalized! Make sure that you should give yourself extra time if you are going to Mr. Misen. The round ticket for the ropeway is 1,800 yen.