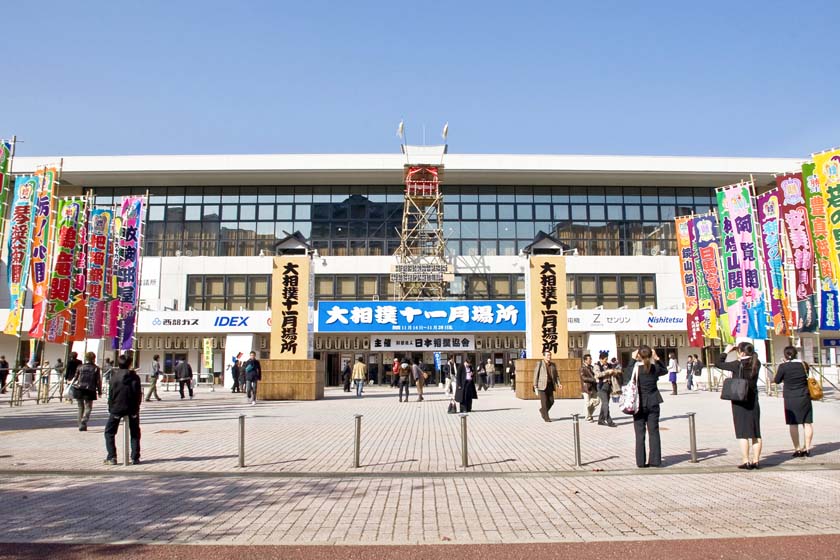 Fukuoka, from the beginning to the end of November, offers a slightly different atmosphere from other months. From the end of October, young wrestlers from each stable start arriving in Fukuoka to prepare for the November Grand Sumo Tournament, the final tournament of the year, held in Kyushu.

In November, JSA (Japan Sumo Association) officials and wrestlers from each stable will arrive in Fukuoka, and the atmosphere of the Kyushu Grand Tournament will take over. As more and more wrestlers are seen on the streets, and the distinctive fragrance of “binzuke abura” (pomade used to style a sumo wrestler’s top-knot) begins to waft through the air, Fukuoka citizens brim with excitement, knowing that another tournament is about to begin.

Every year, the Kyushu Grand Sumo Tournament is usually held for 15 days, starting from the second Sunday in November at the Fukuoka International Center in Chikko, Hakata-ku, Fukuoka City. In the past, the JSA had a difficult time attracting many spectators on weekdays, but in the past few years, the popularity of sumo has increased nationwide, and the Kyushu Grand Sumo Tournament has been packed throughout all 15 days.

As a result, tickets have become more difficult to acquire. In the past, it was possible to go to the Fukuoka International Center on the day of the event to buy tickets at the ticket office to the right of the main entrance, with time to spare. These days, buying a same-day ticket requires lining up in front of the ticket office in the morning.

40 stables or more are based in Fukuoka during the tournament

Tenjin is only a 15-minute walk away, so after 6:00 p.m., when all the Sumo activities are over, many people can be seen walking from the International Center to enjoy Hakata’s delicious food and drinks.

During the tournament, more than 40 stables are based in Fukuoka Prefecture and some in Saga Prefecture, where the wrestlers and other related personnel spend about a month. Sumo enthusiasts come from all over the country, but local people can also watch the practice sessions that start early in the morning, before and during the tournament at most of the stables.

Although it varies depending on the stable, the wrestlers generally hold morning workouts from 6:00 to 10:00 a.m. After practice, members of the supporters’ association often share “chanko nabe” (hot pot for sumo wrestlers) with the wrestlers of the stable. With luck, some general visitors may also be allowed to join them.

Incidentally, the Kokonoe stable, which produced the last great Yokozuna (Grand Champion) of the Showa era, Chiyonofuji, has its dormitory at Torikai Shrine in Fukuoka City’s Chuo Ward, and a photo of Chiyonofuji in his heyday hangs in the upper left corner of the shrine’s hall of worship.

Visiting the stables of the wrestlers that fans are interested in provides a different perspective from what is seen on TV, giving them an opportunity to see the wrestlers’ facial expressions and getting an up-close sense of their demeanor. It is a unique feature of the local tournaments.

If you are lucky, you can see sumo wrestlers in the city

Many events related to the Kyushu Sumo Tournament are held before and after the tournament, and popular Sekitori (literally meaning, “taken a position”; a sumo wrestler who is ranked in the second highest division, and receives a salary and full privileges) are invited as guests to interact with participants.

It is fun to check the schedule and go out, where fans just might happen to see wrestlers slurping noodles at a ramen shop, or see lower ranked wrestlers riding bicycles, and carrying rods after the day’s tournament to go fishing. November in Fukuoka offers many possibilities for unexpected encounters and situations, and visitors can look forward to a season filled with fun.

In addition to Fukuoka, local tournaments are held in Osaka and Nagoya, but compared to those cities, the Kyushu tournament is characterized by especially boisterous cheering for the wrestlers from Kyushu. The aforementioned former Ozeki, Kaio and Kotoshogiku, were applauded and cheered from all directions in the Fukuoka International Center, every day.

Even though the event is held in Fukuoka, wrestlers from six other prefectures in Kyushu, in addition to Fukuoka, are cheered loudly; as a result, this makes for an even more enthusiastic tournament than at the other locations. Such a unique scene can only be experienced at the Kyushu Grand Sumo Tournament.

In the latter half of November, after the final day of the Grand Tournament is done, the Kyushu Sumo Tour will begin in various parts of the region. While some enthusiasts follow the regional tournament from venue to venue, general tourists can also attend, if they can get tickets in advance or on the event day. Many people look forward to the tour because the atmosphere is completely different from that of the main tournament. Fans can see the wrestlers say and do things differently than usual, as well as have the opportunity to interact with them.

November is also when the beginning and peak of the autumn foliage season in Fukuoka coincides with the Kyushu Grand Tournament. Additionally, as the temperature drops during the latter half of the tournament, it is recommended to partake in a Fukuoka custom by enjoying hot Hakata ramen, motsu nabe (hotpot with tripe, vegetables and tofu), and mizutaki (chicken hotpot), after watching a sumo event.