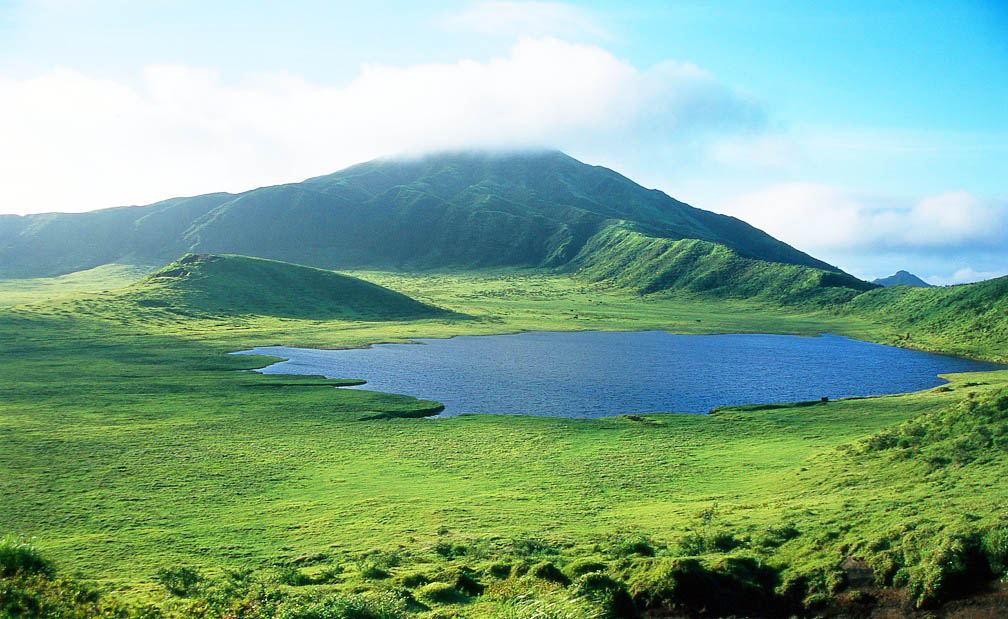 The first time I saw Mt. Aso was when I climbed Mt. Kuju. I got off the bus at Makinoto Pass, and started climbing the mountain from there. This pass is the highest point on the Yamanami Highway. The road climbing upward is well maintained. The weather was beautiful that day, and I could see far into the distance.

At the observatory of Makinoto Pass, I met a couple whose hobby was mountain climbing. They told me, “Look at the mountains over there”; I looked in the direction they were pointing, and saw large mountains stretching out horizontally.

They asked me, “That’s Mt. Aso, but doesn’t it look like something? It’s called the Reclining Buddha, and it looks like the figure of a Buddha lying down. Look, this is the head, and that is the foot.” When they said that, I felt as though something stirred within me. It really looked to me like the Buddha was lying down with a gentle expression on his face. Whenever I see Mt. Aso, I always remember that time.

One of the largest calderas in the world

Mt. Aso is an active volcano, located in the Aso region (Aso City, Takamori Town, Minami Aso Village) of Kumamoto Prefecture, in the center of Kyushu, Japan. It has 17 central crater hills, a large outer rim, and one of the largest calderas in the world. The caldera is a large hollow that was formed by the eruption of the volcano. The caldera is 25 kilometers long from north to south; 18 kilometers long from east to west; and covers an area of about 380 square kilometers.

The caldera was formed by four major eruptions that occurred up to 90,000 years ago, spewing large amounts of volcanic ash and other debris. The fourth eruption was particularly large, with pyroclastic flows covering all of Kyushu and volcanic ash reaching as far as Hokkaido, so you can imagine how big the caldera is.

The outer rim of the mountain was created by the formation of the caldera, and it is also the edge of it. There are several places to view the outer rim of Mt. Aso, but among them, the view from Daikanbo is truly spectacular. It is definitely a place to visit when you go to Mt. Aso.

Mt. Aso is also known as “Aso Gogaku,” and as the name implies, it consists of five mountains. Referring to the reclining Buddha, Nekodake would be the head. Then, there are Takadake, Nakadake, Eboshidake, and Kijimadake, aligned in that order.

I would like to recommend Nakadake. The elevation there is 1,506 meters. It is an active volcano that continues to repeat its lively eruptions to this day. The one that occurred immediately after the Kumamoto earthquake in April 2016, and another one six months later, still remain fresh in the people’s minds.

When I first saw the crater on Nakadake, I was speechless and amazed at the beauty of the emerald green pool of hot water in the hollow, surrounded by the rugged mountain surface. The color was truly beautiful.

Nakadake crater can be reached by car via the Mt. Aso Park Road, where tolls are not assessed. There used to be the Mt. Aso aerial tramway, but it is currently non-operational. As an alternative, a shuttle bus is available.

Volcanic gases (sulfur dioxide, SO2) flow around the crater. Access is restricted in the event of increased activity, or when toxic fumes are generated. Visitors with asthma, bronchial disease, heart disease, cardiac pacemakers, or other health issues are not allowed to visit the crater. For more information on the restrictions pertaining to the Nakadake crater, please refer to Aso Volcano Crater Regulation Information.

On the way to the Nakadake crater, there are Kusasenrigahama and Sunasenrigahama. Kusasenrigahama is a large grassland formed by the remains of a former crater, with a large pond in the center and grass-grazing horses, creating a relaxing landscape. There are restaurants, souvenir shops, and ample parking space. On the premises is the Aso Volcano Museum, where visitors can learn about the origins and topography of the Aso volcano, and view live camera images from inside the Nakadake crater.

Unlike Kusasenrigahama, Sunasenrigahama is a desolate wilderness of volcanic ash and gravel. It was also used as a filming location for an Akira Kurosawa movie.

Eboshidake has a relatively gentle slope, compared to the other mountains. So, of the five Aso mountains, this would be recommended as the first to try climbing. It is 1,337 meters high.

Takadake has the highest elevation, at 1,592 meters.

With an elevation of 1,408 meters, Nekodake was the first of the five Aso mountains to form. The summit of this mountain is jagged and sharp, which was a little strange to me, as I only imagined a smooth surface. There is a long, protruding rock called “Tengu Iwa,” that resembles a “tengu” (legendary long-nosed goblin that possesses supernatural powers).

There is much to see around Mt. Aso, including the Shirakawa River source, where beautiful water continuously springs from this first-class river; the Aso Shrine, which is said to have a history of over 2,000 years (currently under restoration, after its collapse due to the Kumamoto Earthquake); hot springs, such as Aso Onsen and Uchimaki Onsen; and delicious gourmet restaurants.

In addition, the various routes in the Aso mountain range have been cut off due to collapsing and cracking caused by the April 2016 Kumamoto earthquake, and some routes and footholds are no longer accessible. Visitors are urged to confirm the latest information on climbing Mt. Aso, projected weather conditions, and eruption-related news. Please take sufficient precautions before attempting to travel to the area.