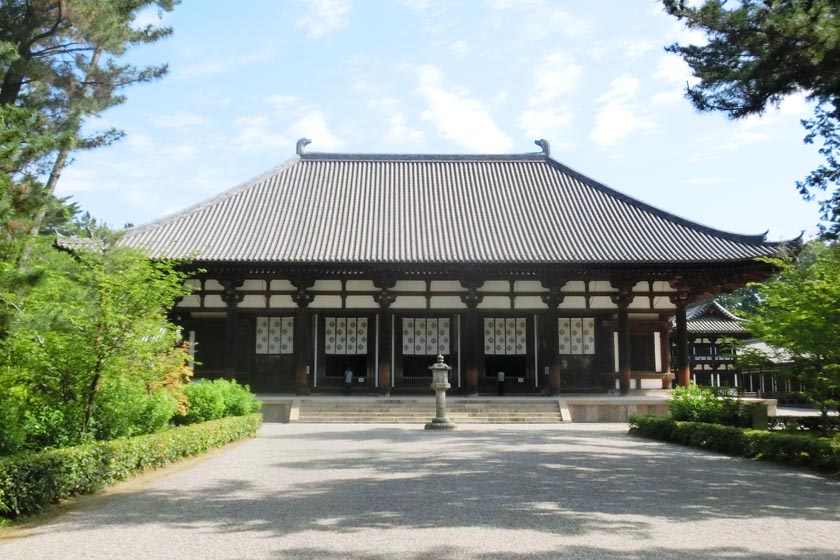 We will go to Gangoji Temple from JR Nara Sta. East first. Asukadera Temple is the oldest temple in Japan. It was built in the 6th century and moved to this place in the 9th.  The name was changed to Gangoji when the capital was transferred to Heijo. We can see the oldest roof tiles and pillars remaining in the building of Gokuraku Hall or Zen Room of Gangoji Temple. We feel the atmosphere of the old days’ Nara.

Next, we will reach Kofukuji Temple on foot. On the way there, we can see a beautiful five-story pagoda. There is a scenic spot near the Sarusawa pond where you can take great photographs with the pagoda in the background. At the National Treasure Museum of Kofukuji Temple we can see a very popular statue of Ashurazo.

Kofukuji Temple is also an old temple founded in 669. The rebuilt Center Golden Hall is beautiful and its vermilion color looks striking against the green of the surrounding trees. This hall is the largest wooden building in the present days in Japan.

After that, we will arrive at Kasuga Taisha Shrine on foot. From first Torii gate to second one is 1 km and we must calm our mindwhile walking this road before we go to face God. When we go through the second gate, we feel a holy atmosphere. This shrine is rebuilt every 20 years. The vermilion-lacquered structures are very impressive.  There are so many small shrines dedicated to different Gods and a lot of lanterns.

In February and during the Bon season in August, all the lanterns are lit. It looks fantastic at night. Near it is Nara Park, where you can see lots of deer. The deer is believed to be a messenger of God.

The large statue of Buddha in Todaiji Temple

1,300 years before Emperor Tenmu decided to make a large statue of Buddha. He relied on Buddhism to free the country from famine, epidemics and earthquakes.  A large number of people gathered from all over Japan and it took 5 years to make it. I feel that Emperor had the strong will to save people by Buddhism, although, at the same time he made them work hard.

The Ruin of the Heijo Palace Site

Next day, we will visit the Ruin of Heijo Palace Site by bus. We will get there after watching the local panorama from the bus. The prominent gate called Suzaku Gate was reconstructed in 1998 and from there, we can see Former Imperial Audience Hall. On the left, there is a building with museum and laboratory. On the right, there is the Exhibition Hall where we can see the remain of Heijo Palace.

When we go through the gate of Toshodaiji Temple, there is a clean and calm atmosphere. We might feel as if we slipped through time to the ancient Nara.

There were lots of temples in Nara in those days and Toshodaiji was one of them. But it is different from the other temples because it was founded by the famous monk called Ganjin and not by aristocrats or the Imperial court as was usual in those days.

Ganjin was a famous monk in Old China. He was invited to Japan by the Emperor, but the voyage in those days was very difficult and dangerous and he tried and failed 5 times. When he finally came to Japan, he lost his eyesight. We can see the real -size statue of him.

There is another very impressive statue we can see here, it is the Buddha with 1000 hands, each of them holding a tool to help people.

Yakushiji Temple as a hospital in Old Nara

A must-see temple which was rebuilt based on the original style. There are two very beautiful towers. The main building is called the Golden Hall and it contains three beautiful statues of Buddha.

The central Buddha statue is called Yakushi Nyorai. He has a medicine in his hand―for this reason he was a doctor in those days. On his left and right side are his assistants, one working in the day time and the other working in the night time, so this temple was all day emergency hospital.

When I vised it before, a monk told us the above story. I thought people couldn’t do anything except to pray to God or Buddha in those days.

Even today, we can only pray if we get an incurable illness. To pray for someone, and to fight knowing that someone is praying for us, can give us a miracle power. We can get to know the life of people in the old days by going on this trip.