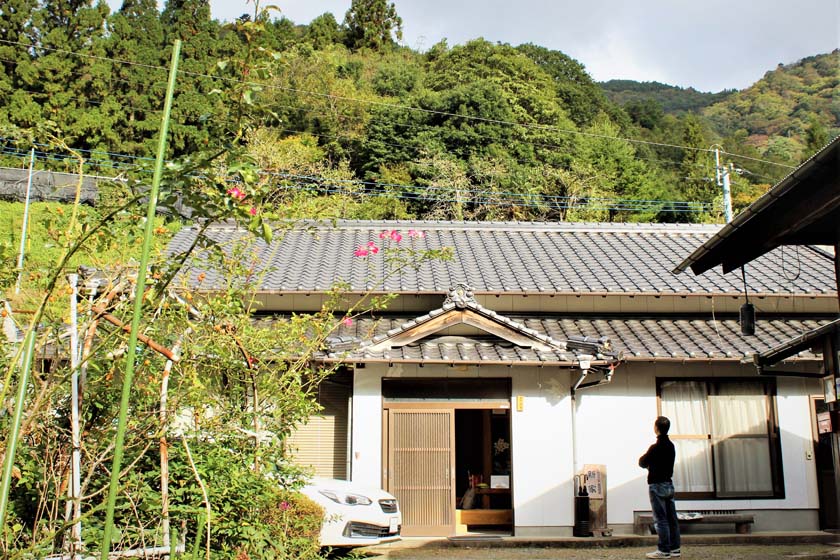 Miyazaki is a popular tourist destination. Blessed with sunshine and greenery, there is an abundance of food from the sea and mountains. The coastline is long and offers beautiful tropical scenery.

There are also many places associated with mythology. You can also enjoy boating at Takachiho Gorge, where the legend of Amano Iwato remains. In the Nichinan area, where phoenixes are planted along both sides of the road, there are many places to visit while thinking about the world of the Kojiki (Records of Ancient Matters) such as Udo Shrine, Miyazaki Shrine, and Aoshima Island. Shiiba Village, with its legend of the fallen Heike, is also popular. In Nobeoka City, you can enjoy marine sports such as diving.

Although Miyazaki has many different charms, one thing they all have in common is that time seems to flow slowly, no matter where you go. And I think many of the people here are sincere.

Morotsuka Village in the mountains

Such is the case in Miyazaki; however, this trip was to a small village in a mountain that is not often mentioned in tourist guide books. The village used to make a living from forestry and shiitake mushrooms. Now they use cheap building materials from abroad and it is difficult to make a living by forestry alone, so the young people go to work in the city. However, in this village, which is full of energetic elderly people, everyone is now working on “tourism” to revitalize the town.

The reason I visited Morotsuka Village was to see Nobuko-san, whom I met and became friends with on a trip to a farmer’s home in northwestern France. I went there with my husband who has never met her before. Nobuko-san’s house is one of the 11 guest houses in the village. The wood-heated bath was a nostalgic and relaxing experience.

Unlike most lodgings, guests and hosts sit around the dining table together. After dinner, we spent a pleasant time with the host and Nobuko-san, who talked about various things with us while drinking shochu like old friends.  I felt like being at a relative’s house.

Before dinner, we were taken to a village meeting. The village chief and all the village leaders gathered to talk about the next day’s Momiji Festival. We met for the first time and were welcomed warmly by everyone. It was a happy time for us as we remembered the times when we used to talk with our friends in our younger days.

The Maple Festival is held at the trailhead square of Mt. Kurodake. You can see many rare plants in Kurodake throughout the year. Kurodake is 1,455.3m above sea level, and there are 4 observatories at this peak. The nearest observatory from the trailhead is Kurodaki observatory, which is 1,300 meters high and has the best view of the whole mountain. There is a small shrine, Kurodake Shrine, nearby.

Near the summit is the largest virgin beech forest in the village. It is a popular place for mountaineering enthusiasts in Kyushu and is said to be crowded with many climbers during the fall colors season. In January, you can see Fukuju-so (Amur adonis) growing in clusters, which are extremely rare in Kyushu.

There is one more popular mountain called Mt. Morotsuka among climbers. Mt. Morotsuka has been revered as a mountain of the Gods since ancient times. Mt. Morotsuka is 1,342m above sea level. From late April to early May, azaleas with bright pink flowers decorate the mountain.

As Miyazaki is a land of mythology, Kagura dances have been passed down from generation to generation in various parts of the prefecture. Kagura provides an opportunity for people to pray for the advent of God and to enjoy the company of God. There is a kind of Kagura called “Yo- Kagura” which goes on all night long.

Here in Morotsuka, there are three schools of kagura, -Toshita Kagura, Minamikawa Kagura and Kastura Kagura-which are performed in January, February and November respectively. I have never been there in winter so I haven’t seen Morotsuka Kagura yet. I hope to see it someday. Morotsuka’s Kagura is closely related to people’s lives, going around to each house and the assembly hall.

Morokko House, a specialty shop located at the entrance of the village, sells fresh and dried shiitake mushrooms, shiitake dressing, handmade miso, and woodwork products made from high-quality cedar.