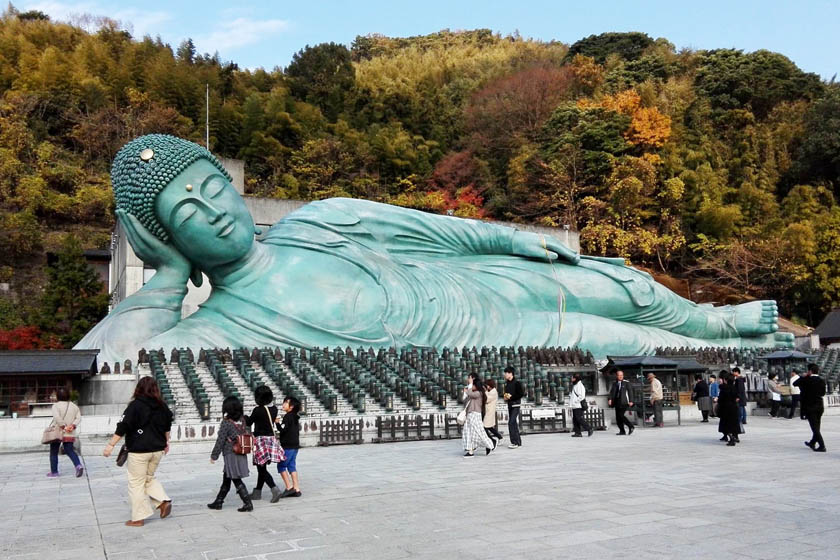 I visited Nomiyama Kannon for the first time during the season of autumn foliage. I was impressed by the beauty of the color of the leaves.  The harmony of yellow, light green, orange and cardinal red was so beautiful.The scarlet color of Japanese Enkianthus especially caught my eyes. You can enjoy not only autumn leaves but also cherry blossoms in spring.

You can take pleasure in the relaxed atmosphere of this place. Whenever I visit this temple and walk around its precincts, I feel my body and mind become clean. The main building of this temple has a solemn and mysterious atmosphere. We can see some terraced fields and a village.

There are a few teahouses nearby. When I visit Nomiyama Kannon I have a rest at Inoue teahouse. Tow old women run this shop. They are the third generation of this teahouse. They are very friendly and welcome new people as if they are their relatives. I recommend you tasting an ohagi-traditional Japanese sweet with a cup of hot tea at this teahouse.

Tenoin temple is a sub-temple of Nomiyama Kanonji. This temple has lots of buildings and each building has a different Buddha statue. This temple is suitable for a walk while watching the beautiful scenery in all seasons. Of course, the temple is a religious place to worship the Buddha, but at the same time this temple has a warm atmosphere for everyone who visit it.

A large statue of the reclining Buddha in Nanzoin

From Nomiyama Kanonji to Nanzoin we can go by car in 20 minutes. Nanzoin is easy to reach, we can get there by train from Hakata station in Fukuoka city. We get off at Kido Nanzoin station and can reach Nanzoin temple on foot in 5 minutes.

This temple is very popular and many people visit it. It is located in the middle of a small mountain. It includes a large land with a river, falls and ponds. We can see carps and turtles in the ponds.

There is also a big and scare statue of Fudo Myoo. Next, you can see cute statues of Jizo Bosatsu. Passing through the tunnel of Seven Lucky Gods, you will be very surprised to see a large statue of the reclining Buddha. This is the biggest bronze statue in the world. The total length is 41meters, the height is 11 meters and it weighs about 300 tons. Can you imagine how big it is?

Nanzoin has sent medical supplies to the children of Myanmar and Nepal for many years. The Buddhist congress of Myanmar presented Nanzoin with sacred ashes of Gautama Buddha, Ananda and Maudgalyayana as a return for Nanzoin’s donations. After that Nanzoin built the statue to worship these sacred ashes. We can enter the statue. Near this statue, you will find souvenir shops.

The pilgrimage of the 88 temples in Shikoku

Nanzoin is the first head temple and the first amulet-issuing office of Sasaguri Shikoku Buddhist Pilgrimage Route. In Japan we have Shikoku Buddhist Pilgrimage Route. It is related to Kukai, one of the most revered monks in Japan. He went to China as an envoy in the 9th century and studied esoteric Buddhism. Upon his return to Japan, he founded the Shingon sect of Buddhism.

People undertake the pilgrimage to the 88 temples in Shikoku which Kukai is said to have visited. It is said that visiting all the 88 temples makes us to free from our attachments to the ego and that we can get our wishes fulfilled. Sasaguri Shikoku is one of the three major Shin-Shikoku sacred place. Nomiyama Kanonji is the 16th amulet-issuing office and Tenoji is the 36th.

Mixing of Buddhism and Shinto

Both inside of Nomiyama Kannon and Nanzoin, we find shrines. It seems strange. Shinto is the natural indigenous religion of Japan. Shinto gods are worshipped at shrines. Temples are the places of faith dedicated to protecting the Buddha.

Buddhism came to Japan through Korea from China in the 6th century and was adopted as the state religion in the Nara period. But Buddhism never supplanted the indigenous Shinto practices of worshiping nature and ancestors.

In fact, the two complemented each other so well they survived happily side by side. So, before the Meiji era in the 19th century, there were very often both shrine and temple buildings in the same compound.

But the new Meiji oligarchy tried to split the two apart. Many Buddhist temples and statuary were destroyed, but this did nothing to change the old forms of worship, and today, as ever before, Japanese people still worship both Shinto and Buddhist gods. Sometime we can see shrine and temple buildings in the same place.