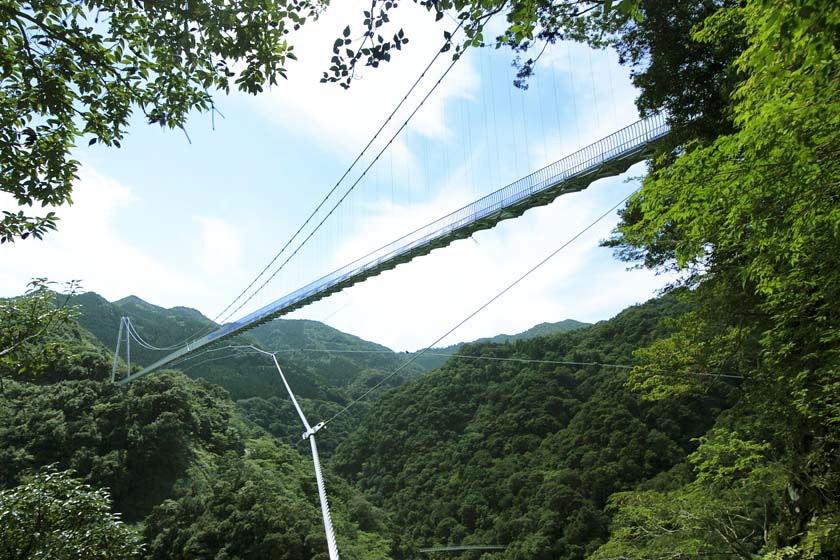 Aya Town is located at the southeastern foot of the Kyushu Sanchi (Kyushu Mountains), accessed in 35 minutes by car, or less than an hour by bus, from the prefectural capital of Miyazaki City. Heading upstream along the Honjo River and Ayakita River, both tributaries of the Oyodo River, the scenery of the countryside and fields spreading out on either side soothes the senses throughout the four seasons.

Now, as we enter Aya Town, the trees on the mountains change. Miyazaki Prefecture is characterized by its large number of man-made cedar groves, such as the Obi cedars in Nichinan City, but the mountains of Aya Town are almost entirely covered by natural broadleaf evergreen forests.

Various types of broad-leaved trees, including beech, oak, laurel, and camellia have grown in their untouched natural state. The leaves are different in color, shape, thickness, and size, and especially during the season when new leaves develop, they literally glowing green, resembling broccoli or cauliflower sprouting up.

Characterized by their resistance to the cold in winter, there are few natural forests that have retained their primeval flora and fauna since ancient times like these, making them a valuable existence, not only in Japan, but also in the world.

Aya Town, where 80% of the total area is comprised of forest, was quick to take notice of one of Japan’s largest broadleaf evergreen forests, and has been promoting regional development to protect it for over half a century. It was designated as a national park in 1982, and registered as a UNESCO Eco Park in 2012. Specific projects include the establishment of new protected forests; restoration, from man-made forests to broadleaf evergreen forests; and forest environment education.

In 1984, the Green Teruha Suspension Bridge was completed to allow people to enjoy this great natural forest, closely and from a higher altitude. Since then, it has been popular as a symbol of tourism and forest conservation in Aya Town, and in 2004, it won the Excellence Award at the Japan Society of Civil Engineers Design Awards. In 2011, the bridge was redesigned and replaced with the new Teruha Suspension Bridge. The bridge is 142 meters high, and 250 meters long.

Although it is a man-made bridge in the middle of a natural virgin forest, it gives the impression of blending in with the natural landscape without looking out of place. When you cross the bridge, you will feel the splendor of the virgin forest, and the importance of preserving nature while taking a walk in the air.

Enjoy walking on the forest therapy road through the woods

After crossing the Teruha Suspension Bridge, a 2-km nature trail extends through the broadleaf evergreen forest. Walking slowly, you can enjoy about 40 minutes of “forest bathing” (immersion of the senses into the forest atmosphere; nature therapy). Compared to coniferous trees, a higher concentration of oxygen can be absorbed, which is undoubtedly good for the body and mind.

It is also certified as a forest therapy road, and along the way, there is a laurel tree with a trunk circumference of over four meters; beech and other varieties of trees; the Kajika Suspension Bridge that is 22 meters high and 75 meters long; and plenty of greenery and water to be enjoyed.

Forest bathing while listening to the chirping of wild birds, and soaking up the light filtering through the trees is highly recommended. If you are lucky, you may encounter some rare insects.

The water of the Aya River, that flows through Aya Town, gushes out from deep in the mountains of the town and nurtures the broadleaf evergreen forest. It is called the Ayakawa Springs, and has been selected as one of the 100 best springs in Japan. 4.5 km down the river from the suspension bridge is Senpiro Falls.

Miyazaki Prefecture, along with Kagoshima Prefecture, is a major producer of sweet potato shochu (distilled liquor). Aya Town is also home to a factory of Unkai Shuzo, a large-scale brewery. Shusen no Mori (tourist complex) under the direct management of the brewery opened in 1989. It offers factory tours and an art gallery, which is like a major amusement park.

In addition to shochu, they also produce sake, once said to be the southernmost sake brewery in Japan, and the first full-scale winery in southern Kyushu. The shochu and wine factories are open for tours, and visitors can enjoy tasting and comparing different kinds of wine. It also produces local beer, making it a must-visit destination for alcohol enthusiasts. Every spring, the brewery opens its doors to the public, and in the fall, a new sake festival is held, attracting many visitors.

Miyazaki is an agricultural prefecture, so Aya Town produces a wide variety of fruits and vegetables. The types of fruits and vegetables shipped vary depending on the season, but Miyazaki’s specialty fruit trees include mango, Hyuga-natsu (citrus), and kumquats. Vegetables include sweet potatoes, cabbage, lettuce, spinach, carrots, radishes, burdocks, and other leafy and root vegetables. Mountain vegetables include shiitake mushrooms, bracken, Japanese parsley, and bamboo shoots. All are sold at the Aya Handcrafted Products Center.

The town has established its own standards, and all the products are produced through natural ecosystem agriculture, which reflects on the distortions caused by modern agriculture, and promotes organic farming without using chemical fertilizers and pesticides as much as possible.

The certification system is based on the following four criteria: 1.) Eliminating the use of synthetic chemicals, such as chemical fertilizers and pesticides; 2.) Restoring the natural ecosystem, such as the soil, which should be functioning properly; 3.) Maintaining food safety and health, and promoting agricultural methods that eliminate genotoxicity; and, 4.) Not cultivating genetically modified crops.