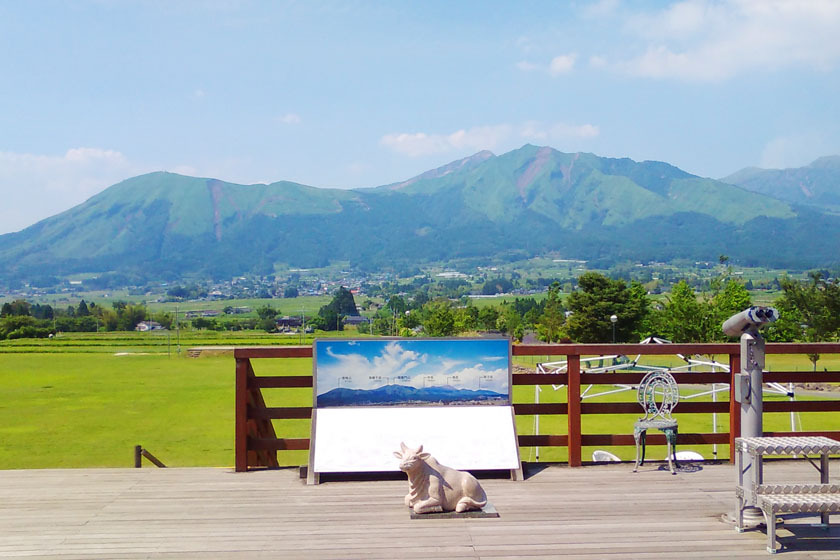 There are good hot springs, water sources and gourmet food

The Minami Aso area in Kumamoto Prefecture stretches to the south of Mt. Aso, one of the world’s largest calderas, and offers much to see and do, including hot springs, water sources, and gourmet food. Let’s take a tour of Minami Aso, while enjoying the spectacular view overlooking Mt. Aso.

The hot spring areas of Minami Aso are concentrated in the western region, with Jigoku Onsen and Tarutama Onsen being the most famous in the country. Both were damaged by the earthquake that struck in 2016.

The “Suzume (sparrow)-no-Yu (hot spring)” at Jigoku Onsen Seifuso, where there used to be “mixed bathing” (mixed-gender bathing), reopened in April 2019. The procedures were changed to require bathers to wear bathing suits when entering. The idea is that everyone, young and old, men and women, can enjoy the hot spring together.

Suzume-no-Yu is said to be a miracle hot spring where people can bathe at the source, without adding any heated water or cooled water. It has a history of about 200 years, and has been passed down through seven generations. During the Edo period (1603-1868), only the samurai were allowed to enter the hot spring, making it a secret therapeutic hot spring in Minami Aso.

The spring is a highly acidic sulfuric hot spring with both hot and tepid water, and is recommended for its traditional mud bath, with hot spring water bubbling up from the bottom.

Tarutama Onsen was created when the force of the falling water from Kinryu no Taki (Golden Dragon Waterfall) dug down to the stratum of the spring source, right in front of the hot spring. Yamaguchi Ryokan, which has a history dating back to the Meiji era, is currently under construction to reopen its day spa facilities in the spring of 2021.

In addition to the day spa, there will be private baths, rest facilities, and facilities for eating, drinking, and sale of goods. There are also other hot springs in western Minami Aso, including Tochigi Onsen and Tawarayama Onsen.

The 100 most famous spring waters in Japan “Shirakawa Suigen”

There are many water sources in Minami Aso, and although the volume of spring water varies, they have been gushing out of the ground without interruption since ancient times. Cycling around the water sources is also popular.

The water from the foot of Mt. Aso flows underground to Kumamoto City, and pours into the Ariake Sea. Not only Kumamoto City, but the 11 surrounding cities, towns, and villages are all supplied by the groundwater. The water at Suizenji Park, a famous tourist spot, is also from Mt. Aso.

The most famous water source is Shirakawa Suigen, which is one of the 100 most famous spring waters in Japan, and the source of the Shirakawa River that flows through Kumamoto City. The water temperature is always 14° Celsius (57.2° F), and as much as 60 tons of water gushes out every minute. Water from the source can be taken home freely, and heated water is also available for sale.

There is also a souvenir shop and a paper-making workshop nearby, where visitors can enjoy hands-on experiences making colored paper or postcards.

Another water source is Shioisha, located in the western part of Minami Aso. In the serene compounds of Shioi Shrine, the spring water gushes from the bottom of the clear blue green pond. After the Kumamoto earthquake in 2016, the water stopped flowing and dried up completely.

One day, a year later, it was discovered that a small amount of muddy water had accumulated, even though it had not been raining. In the summer two years after the earthquake, clear and clean water gradually started to collect, and the pond returned to its original transparent blue color.

There are many other water sources with parking lots for local people and tourist, such as Myojin-ike Meisui Park and Ikenogawa Suigen.

Takamori Town, located in the eastern part of Minami Aso, is another town with many attractions. There are two unusual shrines.

The first one is Kusabe Yoshimi Shrine, one of the three major “descending shrines” (a stairway must be descended in order to reach the main building) in Japan. After passing through the shrine’s torii gate, there is a long flight of 130 steps leading downward. At the end of the stairs, the main shrine and the worship hall are in front of you. Behind you on the left is a magnificent single cedar tree, over 40 meters tall, 7.7 meters in circumference, and is 1,000 years old.

There are many cedars and other varieties of trees around the temple, creating an air of mystery. The shrine was founded six years prior to Aso Shrine, which is said to be before Christ. There is a spring water pond called “Yoshi-no-Ike,” right below the shrine, which is said to ensure longevity and immortality, and has never run dry.

Next is Kamishikimi Kumanoimasu Shrine. It is located to the east of the five Aso Mountains, near Mt. Nekodake. As soon as you pass under the torii gate of the post office, you will be facing an upward staircase that leads to the front of the shrine. After that, the upward stairs continue as small fragmented steps, entering into the mountain. Both sides of the path are lined with cedar trees and lanterns.

Gradually, the atmosphere becomes increasingly mysterious, and eventually it begins to resemble a mountain climb, with the only sounds coming from the birds. Unlike Kusabe Yoshimi Shrine, this is a typical ascending shrine with more than 260 steps. It takes about 10 minutes to reach the shrine, and after worshiping is done, there is a further uphill path to the left. There are canes available to help assist the climbers for the steep path.

On the ascent, as you look up, there will be a large cracked rock. It’s a rock with a big hole in it, and light can be seen shining through it. As you go up to the top, you will reach a large hole 10 meters long and wide, just like a cave. According to mythology, Kihachi Hoshi, a retainer, who was chased by the “God of Settlement in Aso,” kicked through the hole to escape. It is a spiritual energy spot, known to help a person overcome difficulties.

After passing through this hole, you will come to a cliff, which is dangerous, so you should not go too far.

The ridgeline of Mt. Nekodake can be seen from between the branches of the grove of trees. This was the setting for the short manga and animated film, “Hotarubi no Mori e” (To the Forest of the Fireflies), and many people visit this site for holy pilgrimages.

Takamori Town also has a spring water site. Takamori Spring Water Tunnel Park was built from a railroad tunnel that suspended construction due to a water outflow, and was completed in 1994. There are two promenades in the tunnel, and the water flows vigorously between them.

There is also a fountain that creates a magical world of lights and water beads, and a variety of illuminations and creative displays can be seen, such as strips of “paper wishes” during the Tanabata Festival, and numerous decorated trees during the Christmas season. At the end of the path is the water outlet, where there is a water god pillar, and water jets out powerfully and vigorously from almost all sides of the rock.

The specialty of Takamori is Dengaku. Dengaku is a traditional Japanese dish made by grilling tofu and other ingredients with miso. There are several restaurants where you can eat Dengaku, but at Dengaku no Sato, which operates inside a 200-year-old traditional private house with a profoundly nuanced atmosphere, you can take off your shoes, and go up to a room with a wooden floor to enjoy Dengaku around a sunken hearth.

Each hearth is lit by a bare light bulb, and although the ingredients change with the season, you may often find potatoes, eggplant, tofu, beans, shishito peppers, and river crab skewered and placed over the fire. It takes quite a while for the food to cook, so patience is required. Depending on the season and ingredients, there are also different types of miso that are used, such as yuzu (Asian citrus) miso or walnut miso. Let’s enjoy the simple, natural taste of Aso.

Aka (red) Beef is not to be missed in Minami Aso. “Red cows,” raised in the magnificent grasslands of Aso, are popular for their lean meat and moderate fat content, which makes the meat healthy and delicious. There are several restaurants that serve Aka Beef, but the steak at Hakusui no Kura is highly recommended.

There are also pre-set meals (specials) and horse sashimi.

Finally, there is Caramel Pudding, a pudding specialty store. It is located along Route 325. Their specialty Minami Aso Kodawari Pudding was sold on the Kyushu Shinkansen when it launched its service. Additionally, their “adult pudding” containing rum, is sold on the JR Kyushu sightseeing train, “Aso Boy.”