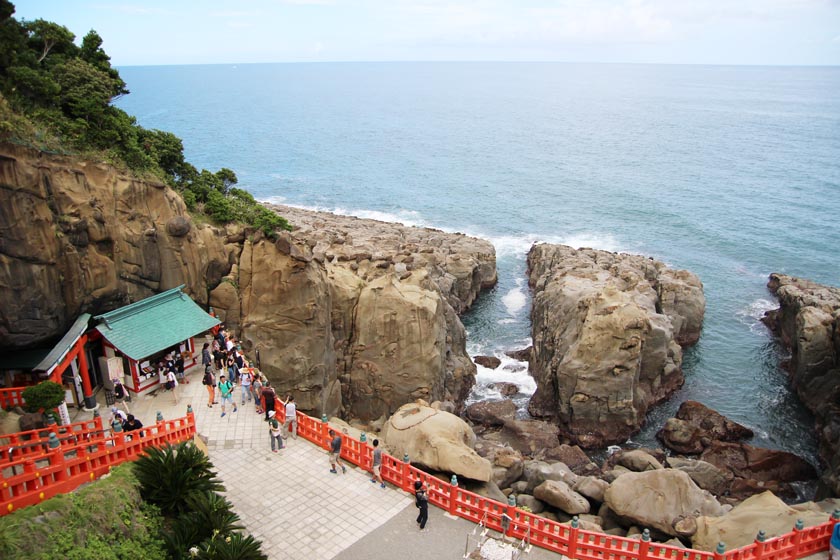 Located in the southern part of Miyazaki Prefecture, Nichinan is a city of history, agriculture and fishing. It takes just one hour from Miyazaki City to Aburatsu Station on the JR Nichinan Line. Nichinan City is also known as the location of the spring training camp for the Hiroshima Carp, a professional baseball team. In 2018, the station building was repainted bright red, and renamed Carp Aburatsu Station. The last coat of paint was applied by then Manager, Koichi Ogata, and it was reborn as a completely new station.

Speaking of red, Udo Shrine (Udo Jingu) is located on the coastline in the Udo district of Nichinan City. It is said to have been founded during the reign of Emperor Sujin, and is thought to date back to the 3rd or 4th century. It is one of the three major descending shrines in Japan, and the last part of the entry path is a cliff-like staircase that descends gradually.

The main shrine is built in a rocky cave at the bottom of the cliff, and once inside, the air is cool and dim, creating a shroud of mystery. The shrine building is painted in bright vermillion with Chinese patterns in certain areas. The present building was reconstructed in 1968, and in 1997, the roof was re-thatched, and the Urushi lacquer and coloring were repainted and restored.

The shrine is said to be beneficial for marriage, harmony between husband and wife, safe childbirth, and safety at sea. It attracts many worshipers and tourists, from Japan and overseas. When you go around to the back of the shrine, it looks like a cave, and the water dripping down from the ceiling of the rock is one of the sources of worship.

According to the mythology of the two brothers, Umisachihiko and Yamasachihiko, their mother, Toyotama Hime, had to return to the sea alone, so she attached both of her breasts to the rock to raise her children after her departure. Known as “Ochichi Iwa” (Breast Rocks), the rocks drip incessantly with clean and clear water, resembling mother’s milk. People come and pray for the safe delivery and happy growth of children. It may be difficult to see in the dark, but if you stand on the footprints and look closely, you should be able to see them.

After exiting the rock cave, there is an attraction where you can throw “undama” (small ceramic good luck balls) into the sea. After buying five undama at the shop at the entrance of the main shrine, men throw them with their left hand and women with their right hand, one by one, while making a wish and aiming for a hole that is surrounded by a shimenawa rope (used for ritual purification) in one of the strange rocks that line the seaside below. This rock is called “Kameishi” (Turtle Rock), and it is said that if you can get an undama into its square-shaped hole, your wish will come true.

It is so difficult that even Kenta Maeda, former pitching ace of the Hiroshima Carp and more recently with the Los Angeles Dodgers and Minnesota Twins in the U.S., once tried to make a wish, but was unsuccessful. The messenger to the gods of Udo Shrine is said to be a rabbit, and there are cute statues of rabbits along the path to the shrine.

When you go inland, you will find the Obi district. This area was a castle town that was centered around Obi Castle of the Ito clan. Remnants of the old castle can still be seen there.

During the Warring States period, the Ito clan was once defeated by the neighboring Shimazu clan of the Satsuma Domain, but they restored the area to its former glory and the Ito clan, despite its small size, was able to hold onto the Obi Domain for 14 generations, competing with the Shimazu clan until the Meiji Restoration. The term “Obi Otoko” depicts the sustaining spirit of Obi’s samurai.

Today, only the stone walls remain from the original construction of the castle, but visitors are welcomed at the Obi Gate, which was restored in 1978.

About 20 meters before the gate is the Yoshokan. This was the residence of Ito Sukeyori, the 14th lord of the Ito clan, who became the domain governor of Obi. The Yoshokan was built in 1868, and after the castle was abandoned, its contents were relocated there. The roof was originally thatched, but was replaced with tile during the Showa era.

The garden is a dry landscape garden with Mt. Atago in the background as a “borrowed landscape.” The skillfully arranged rocks, trees, and stone lanterns represent the ocean, presenting a tranquil harmony to the viewer’s mind. Further into the garden is a beautiful bamboo grove and wisteria trellis, as well as a tea house.

After passing through the imposing Otemon Gate, turn left and right along a perpendicular path, and as you climb up the stairs, you will walk alongside a magnificent Obi cedar grove. As you proceed further, you will encounter a large single cherry tree. Behind it is a steep stairway, and above that is Matsuo no Maru. It is unknown what was there before, as there is no existing record. The building was constructed, through historical research based on materials from all over Japan.

Using Obi cedar trees that were over 100 years old, it was built in 1979 as a replica of a high-status samurai’s residence of the Edo period. Visitors must remove their shoes before entering the building. The pathways are narrow and the ceiling is low in certain places, so visitors should practice caution.

Another building is the Obi Castle History Museum. From the Warring States to the Meiji era, quite a few cultural assets were left in Obi, the castle town of the Ito clan. The Obi Castle History Museum was opened in 1978 to preserve this valuable cultural heritage. Currently, about 220 items are on display. The exhibit not only includes armor, helmets, and swords, but a wide range of items such as women’s palanquins, clothing, toys, daily life implements, and ancient documents.

After walking down the hill from the Obi Castle ruins, you will find the castle town. In addition to two samurai residences and the Shoka Museum, there are cafés, a fried chicken shop, sweet dumpling shop, and many others.

One of the most popular items to try is the Obi Ten (local specialty fish paste tempura). There are some stores in the castle town, but you can also find an Obi Ten shop on the corner of the parking lot heading to the castle. There are several types of Obi Ten including fish and tofu combined (into a paste and fried), and flavored with burdock root and ginger. Next is the fluffy and thick fried egg. This is a thick (omelette-like) egg that is carefully fried in the traditional way, as only found in Obi. Beautiful to look at, they were often presented to the lord.

Nichinan City has the largest quantity of bonito caught by pole and line fishing in Japan. In addition to sashimi and tataki (briefly seared on the outside), there are about 10 restaurants in the city where you can enjoy fresh seafood in other ways, such as a new menu item: “Seared Bonito on Top of Rice.”