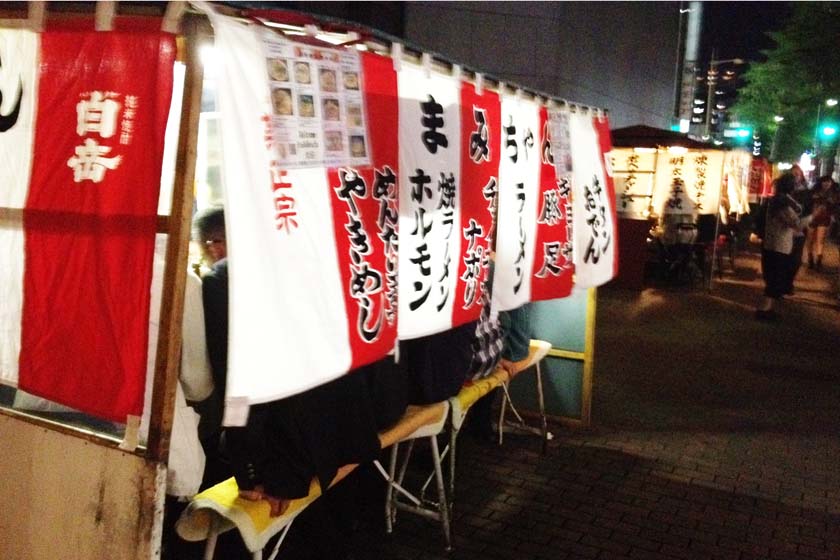 Yatai is one of the special features of Fukuoka

Yatai or food stalls are definitely one of the features of Fukuoka City. Nagasaki, Kochi, and Kurume also have them, but there are less than ten. The yatai in Fukuoka City were started right after World War II. Their history spans over 75 years, so they are considered a traditional culture.

The official number of yatai in Fukuoka City was 103 in 2020. During their peak, there were over 400, but the numbers have gradually decreased due to the proprietors’ aging and succession issues. The civil service hinted at the prohibition of any new openings in 1995, and the policy was implemented in 2000.

The number of yatai in Fukuoka was about 200 in those days, but then decreased to about 150 over the following decade. In 2013, the city government put into effect a standard regulation pertaining to yatai that included the following: no change of location; observance of the regulation; and no name lending.

In 2016, the city made its first public offering of yatai, and 23 new owners launched their business operations. In 2019, nine new yatai were opened in Fukuoka city.

There used to be three major yatai areas in Fukuoka City: Nakasu, Tenjin, and Nagahama. However, the number of yatai in Nagahama has rapidly decreased in recent times. There are only four yatai now, and only one remains open at night on certain days.

First, in the Nakasu area, there are five yatai in the northern area and 19 in the southern area, along the east side of the Haruyoshi Bridge, where the Kokutai Road and Naka River intersect.

This is the central location between two downtown areas in Fukuoka City, around Hakata Station and Tenjin. At night, the lights of the town and yatai are reflected on the surface of the river. Travel magazines and websites almost always include photos of this area to introduce Hakata’s unique atmosphere. It is a very camera-friendly area.

There are many kinds of yatai, and one can enjoy various foods, and feel the liveliness of the pedestrian traffic. There are also ten yatai along Showa Street on the northern side of Nakasu.

As a countermeasure, ensure that there is a price list displayed before entering the yatai. Additionally, it is recommended that you calculate the estimated price before paying.

There are many sightseeing spots to explore while walking through the area, such as the biggest shopping mall in Fukuoka City called Canal City, and the famous Kushida Shrine, known for the Hakata Gion Yamakasa Festival.

Around 30 yatai in Tenjin area

Next is the Tenjin area. There are 32 yatai along both sides of Watanabe Street, within a span of about 800 meters from north to south in Fukuoka City, where one can see the yatai with many colorful “noren” (fabric curtains hung at the entrances) lining the street.

After the first public offering, many yatai opened, including one operated by a Frenchman, and another that is known as a popular gathering place for fans of the Chunichi Dragons, a professional baseball team. There are also famous yatai for good hot pot and ramen.

In another direction, along Showa Street, which runs east to west, there are seven yatai on the east side, and another seven yatai on the west side, at the intersection of Watanabe Street. There are also many yatai that serve only their specialty dishes, such as tempura, teppan ryori (food grilled on an iron plate), and cocktail bars. In Tenjin, there have not been any reports of yatai charging exorbitant prices, so you may enjoy dining and drinking without worry.

Nagahama area is near the fish market

Lastly, the Nagahama area used to be a place where there were over 15 yatai, and many customers went there, including famous musicians and pop idols who grew up in Fukuoka. However, the location is a bit far from the downtown area and inconvenient for public transportation, and as a result, the number of yatai has decreased to only four.

Even so, it is located near the central wholesale fish market, and offers a wide variety of foods. Just as the name “Nagahama Ramen” expresses, the ramen at the popular yatai is excellent. There is also a yatai that was built by the owner, a former carpenter, with a history of over 40 years.

About the manners of yatai

There are also yatai along Tenjin Nishi-dori and Kokutai Road in Fukuoka City, that have rules about not serving raw food. Even salads are not on the menu. Chairs are not allowed to be placed outside of the yatai’s designated parameters. Therefore, if the yatai is full, the customer will have to wait outside so as not to disturb passersby.

There are some unspoken rules for customers as well, such as ordering drinks first; ordering food and drinks as soon as possible; and avoiding staying long, leaving the yatai promptly after finishing drinking and eating. This is to help keep the store’s turnover high, since the prices are somewhat low.

During Japan’s economic bubble, yatai became all the rage, and were often featured on TV and in magazines, nationwide. As a result, the number of tourists from other prefectures increased rapidly, more so than local customers. It became commonplace to see people standing in line every day at yatai that had been introduced in the media.

Since the development of the Internet, the number of tourists from overseas has also increased, and yatai with foreign language websites attract tourists from various countries. Non-Japanese words are often heard, creating an atmosphere that makes a person wonder what country they are in.

Enjoy yatai throughout the four seasons

The best seasons are spring and autumn, and enjoying the taste of Hakata while feeling the spring breeze or cool autumn wind passing through the buildings is very pleasant.

In the summer however, it is indeed hot, and the “noren” curtains surrounding the stalls are all taken down. Drinking beer in this environment is the best.

It is very cold in the winter. The yatai are surrounded by a thick covering to protect them from the wind. Even then, the cold wind comes up around your feet, but the oden (Japanese fish cake hot pot) and ramen you eat are wonderfully delicious. Fukuoka’s yatai can be fully enjoyed throughout the four seasons.

Since more than half of the customers are tourists these days, the dialects of the various regions of the country are exchanged and core stories of the country are told, so while you are in Fukuoka, you may feel like you have visited the entire country.

Through conversation, customers next to each other quickly become friends; some experience a once-in-a-lifetime encounter, while others may find kindred spirits and take each other to another yatai. New encounters occur, and human connections are made. This is one of the best things about yatai.