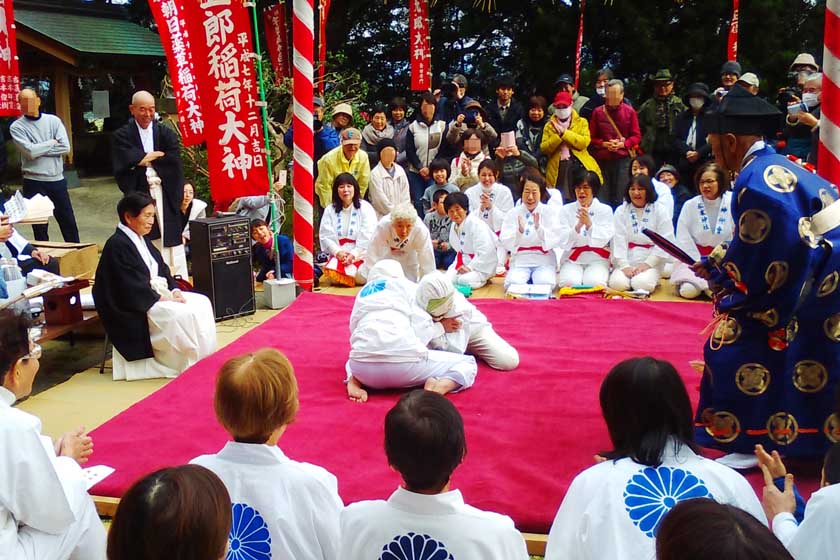 Itoshima may be the only place in Japan where such an exceptionally rare sumo festival is held; where only women can participate, and furthermore, they must be blindfolded. Traditionally, women have never been allowed to step into a sumo ring, but male wrestlers cannot take part in this festival, making this a very unusual event.

The sumo is held in December

This annual event takes place at Masue Goro Inari Shrine in Itoshima City, on the Sunday that falls closest to December 8th.

This unique festival originated just after World War II, when Japan’s society was in a state of chaos, and seemed as though only darkness loomed ahead. The struggles that the people faced, along with the “darkness,” was likened to the difficulty of sumo wrestling, and being blindfolded.

In the beginning, men could participate, however, most of them drank alcohol, caused a disturbance, and fights often occurred. As a result, the festival banned all participation by men. The official judges and announcer are also women; only the referee is a man.

The female wrestlers are divided into 12 ranks

First, the Shinto ritual begins at 11:00 a.m., and the preparation of the blindfolded women’s sumo tournament starts after noon.

The female wrestlers are divided into 12 ranks, and separated into two teams, east and west. A chart is prepared for each rank, from Yokozuna, Ozak, Sekiwake, Komusubi, and 8 Maegashira, ranked in numeric order to eighth rank. Generally, a woman who has contributed to the shrine, local area, and the event is more highly ranked.

A lot of fun to watch the unique sumo

A wrestler wears white athletic pants for the lower part of the body; white happi coat with the Imperial crest, composed of 16 open chrysanthemum petals, for the upper part of the body; and a red and white colored broad sash around the waist. Incidentally, the referee wears the authentic attire, which is very expensive.

First, two wrestlers from the east and west step up to the ring, and sit Japanese style. Next, they bow to each other, then turning their backs, each puts on a hood with the painted face of one of the seven deities of good luck. Unable to see a thing, they are now completely ready.

Then, the referee says, ” Hakkeyoi,” the typical call at a sumo match. They turn to face each other, and while remaining in a sitting position, they seek out their opponent. When one wrestler catches and collapses her opponent, she is the winner.

As they cannot see their opponent, they can hear the spectators yell such things as, “Ahead! Right! Left! Just another so many centimeters!” Wrestlers are sometimes confused because they don’t know if the yelling is for them, or for their opponent. This can lead to a very funny situation.

At the moment of the first touch, wrestlers are usually surprised, and withdraw their hands. However, towards the end, they firmly grasp each other. If one touches her hand or elbow to the mat, she will be defeated. The winner receives a prize, but regardless of whether you win or lose, there are outbursts of friendly laughter.

Blindfolded wrestling is a dedication to healthy and cheerful women. Sometimes, the referee’s decision is contested, which creates an interesting scene as well.

The sumo wrestling is open to all

As an example, participants can be generational, ranging from mothers to daughters, as well as granddaughters of former participants; or a woman who was pregnant the previous year, and returned as a participant in the following year. Their ages range from mid-20’s to healthy old women in their 80’s.

Participants without registering in advance are accepted, as well as international students from Asian or European countries; and local TV announcers often participate.

The wrestlers have interesting “ring names,” for example: “Amaouyama,” from a famous strawberry brand name; a yakitori (grilled skewered chicken) restaurant’s name; and a farm name, “Hyakushoya”; all unique and funny names.

There used to be as many as 13 Maegashira participants on both the east and west sides, and the challenge is to prevent the decline of successors and participants. If you are a woman who is interested in participating, please come to Masue Goro Inari Shrine in Itoshima City, Fukuoka Prefecture on the day of the event.

About 100 spectators attend every year, but the parking lot is not very large, so carpooling is recommended.