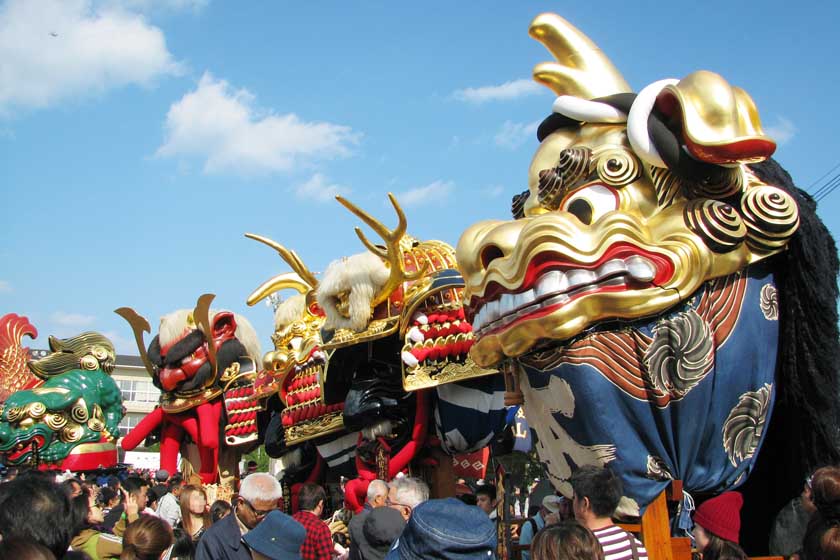 Karatsu Kunchi has a history of over 400 years

Generally, in Japan, when objects are toted at traditional festivals and events, or workers perform a repeated motion of manual labor, the shouting of “Yoi-sho, yoi-sho” becomes a “work call” that unifies the group. During the Edo period, palanquin bearers shouted “Eiho” or “Eisa,” and at festivals in other regions, people shouted “Oisa” or “Oshoi.”

What about Karatsu Kunchi? The chant is unique, and goes like this: “Enya, enya.” Whenever a high school in Karatsu, such as Karatsu High School of Commerce, participates in the famous national high school baseball tournament known as Koshien, cheers of “Enya, enya” will always be heard from the Alps fans in the stands.

The Karatsu Kunchi Festival has a history of over 400 years, and is said to have started as an autumn festival to give thanks for the harvest at Karatsu Shrine, which was built in 755. In the beginning, there were no hikiyama (cart-like wheeled festival floats), but in 1819, after the era of floats that were carried while running, the townspeople of Katanamachi created and dedicated the first “Aka-Jishi” (Red Lion) as a symbol of the festival.

By 1876, other towns had created their own hikiyama, one after another. With a total of 15 hikiyama, Karatsu Kunchi developed into a dazzling and grand event. Subsequently, the Black Lion was destroyed, and now 14 hikiyama appear annually on November 2nd, 3rd, and 4th, attracting about 500,000 tourists.

14 hikiyama will go around the city

November 2nd is the so-called eve of the Yoiyama (evening festival), and each hikiyama is adorned with decorative lanterns and parades brilliantly through the city.

On November 3rd, the Karatsu Grand Myojin (deity) of the Karatsu Shrine is transported by portable shrine to the Otabisho (temporary resting place for deities). Led by the portable shrine, 14 hikiyama will go around the city, speeding up and slowing down to the sound of bells, flutes, drums, and the shouts of “Enya.” Then, the long procession arrives at the west beach of the Otabisho.

This is a sacred place where the body of the god of Karatsu Shrine is said to have washed ashore in the distant past. In the 1950’s, an elementary school was built there, and the ocean was blocked by the school buildings. Now, Waseda Saga Junior and Senior High School use the complex as their secondary campus.

The towing of the floats to the west beach is the biggest attraction of the day, and is also the most difficult task for the youth who tow them.

The hikiyama weigh from two to four tons, and some of them are as high as seven meters. The hikiyama moving slowly, with feet and wheels sometimes caught in the sand with great force, is a sight that draws shouts of encouragement from the spectators. The 14 hikiyama, divided to east and west, and lined up on the sand, are a spectacular sight and attracts tens of thousands of spectators.

On November 4th, the last day of the festival, there will be no shrine rituals, but the hikiyama will be towed around the town as a festival for the townspeople. In the evening, they will be delivered to the exhibition hall for a long slumber, until next year’s Kunchi Festival.

Hikiyama are made by the Ikanbari method (washi paper overlay), which involves first assembling wood; making clay prototypes and wooden patterns; then applying washi paper hundreds of times; covering with linen; painting with many varieties of “urushi” lacquer; and finishing with gold or silver paint. Each town periodically repairs and reconditions the floats; that year, the beautifully restored hikiyama attract much attention at the Kunchi Festival.

As a general rule, all of the hikiyama are lined up in the Hikiyama Exhibition Hall next to the Karatsu Shrine, with the exception of the three days of the Karatsu Kunchi Festival. As soon as you enter the site and turn left, you will be greeted by the first hikiyama, the “Aka-Jishi” (Red Lion). In sequential order, the 14 hikiyama gaze down at visitors in a composed manner, through the glass display case.

In addition to the lion, the symbols of each town, such as a helmet, sea bream, turtle, and killer whale, are displayed with towering presence.

Each hikiyama has crossed the ocean many times. Sea Bream (No. 5 hikiyama) went to France in 1979, and Hong Kong in 2012; Flying Dragon (No. 7 hikiyama) went to Korea in 2012; Golden Lion (No. 8 hikiyama) went to Hawaii in 1996; and Kenshin Helmet (No. 10 hikiyama; helmet of famous samurai, Uesugi Kenshin) made a heroic appearance in Los Angeles and the Netherlands in the 1980’s.

Detailed explanations are provided with each hikiyama, as well as a video of the Karatsu Kunchi Festival that is projected on a large screen, which makes visitors look forward to November with anticipation.

The preparation of costumes, and procurement of ingredients for Kunchi dishes begins in September; and in October, hayashi (group of performers who provide musical accompaniment at festivals) practice begins.

As the festival approaches, the Kunchi cooking is in full swing in each town, with the main houses working all night to prepare enough food for about 200 people.

Various people such as festival officials, business partners, relatives, friends and acquaintances gather together, and over ten kinds of dishes are served; typically, this would include boiled perch, kuri-okowa (rice with chestnuts), zaru-tofu (tofu served in a bamboo basket), and chimaki (leaf-wrapped steamed glutinous rice), are piled onto several platters and arranged on a long table.

Naturally, a lot of expense is involved for this event, but what is most important is the custom of entertaining the people to whom the local community is indebted.

The hikiyama of the Karatsu Kunchi Festival run east to west along the main street of Karatsu City. No matter where you go to view them, whether it is on the straight course, where the speed is high; or at the corners, where skill is required, there is always something worth seeing. On November 3rd, the procession of the deity to the Otabisho goes to the west beach at noon, and is towed out at 3:00 p.m.