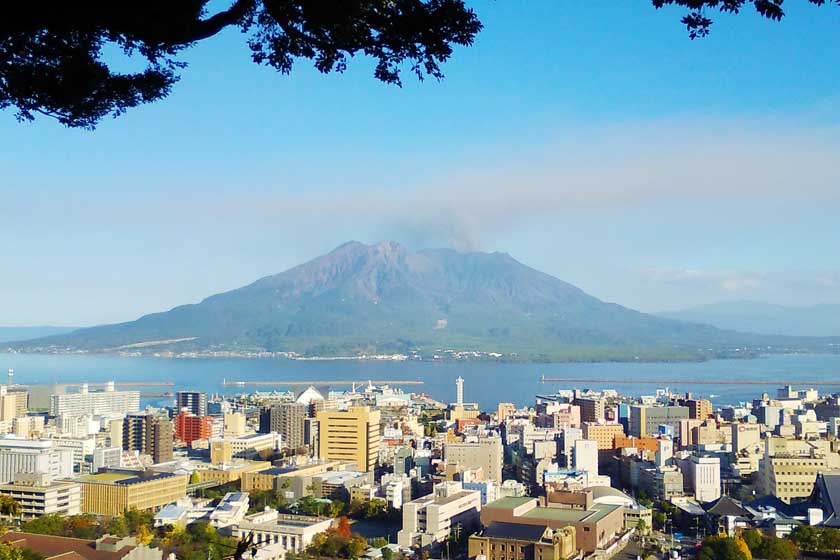 Kagoshima is the southernmost point of the mainland

Kagoshima, the southernmost point of the mainland, offers a plethora of attractions, such as the ocean, volcanoes, history, food, hot springs, and much more. Let’s introduce just a few of them.

About the history of Kagoshima

Starting with its history, Kagoshima received the most attention from the end of the Edo period to the Meiji Restoration. The Satsuma Domain was greatly involved in the revolution that ended the long-lasting era of the samurai. From early on, Shimazu Nariakira, the 28th lord of the domain who later became known as a great ruler, felt the need to adopt the advancements in industrial technology and ideologies of the West, and compete with other countries.

In order to produce strong iron that was indispensable for manufacturing weapons, he repeatedly failed, but eventually built a reverberatory furnace with the help of the Saga Domain. Kagoshima was also where Japan’s first gas lamp was lit.

Both items can be seen at Sengan-en, also known as Iso Teien, which was built in 1658, and is located along Kinko Bay with a spectacular view of Sakurajima across the sea. In fact, the vast garden is designed as a borrowed landscape with Sakurajima as the mountain, and Kinko Bay as the pond. Nariakira also brought many domestic and foreign visitors to this garden. The ruins of the reverberatory furnace are located near the entrance, and the Goten (palace) is located in the middle of the garden.

Guided tours of the Goten, included with refreshment service of green tea and confections, are available. In a corner of the garden in front of the palace, is Japan’s first large stone lantern that was lit by gas. The farthest point along the oceanside is the Sakurajima lookout point, so be sure to walk all around the garden.

There is also an exhibition room of Satsuma Jigenryu, one of Japan’s most famous schools of swordsmanship, where you can actually try striking with a wooden sword. Let’s boldly shout, “Doh!” (meaning “chest,” used in Japanese martial arts; the “kiai” or short shout is uttered when performing an attack move).

To the west of Sengan-en is the Shoko Shuseikan. It was a machinery factory within an industrial complex, where Nariakira integrated the technologies he introduced from the West at the end of the Edo period. It was burned down in 1863 during the Anglo-Satsuma War, but was rebuilt soon after. It now serves as a museum to display the modernization projects started by Nariakira in an easy-to-understand manner. It is the oldest existing Western-style machinery factory in Japan.

Many historical people in Japan came from Kagoshime

Nariakira also fostered human resources to build a new Japan. Many historical figures hailed from Kagoshima. Among them were Saigo Takamori and Okubo Toshimichi, whose accomplishments were instrumental in the establishment of the Meiji Restoration.

The Ishin Furusato-kan (Museum of the Meiji Restoration), located along the Kotsuki River, introduces in detail the achievements of the predecessors who built modern Japan through a variety of significant contributions. There are bronze statues of Saigo and Okubo, as well as Komatsu Tatewaki, Godai Tomoatsu, and others throughout the city; and it is highly recommended for visitors to take a walk around to view them.

The place where Saigo died in 1877 during Japan’s last civil war, the Seinan War (also known as the Satsuma Rebellion), is Shiroyama.

It is located on a hill in the city, and from there, visitors can enjoy a magnificent view of the city of Kagoshima, Kinko Bay, and Sakurajima in the background. The shape of Sakurajima changes depending on the viewing angle, but many people say that the view of Sakurajima from Shiroyama is the most beautiful. If the weather is nice, even Ibusuki and Mt. Kaimondake can be seen in the distance.

Nearby is the cave where Saigo and his followers spent their final night, and visitors can enjoy walking along the promenade. It is also a place of relaxation for the local citizens.

Let’s cross over to Sakurajima. It was originally an island in Kinko Bay, but as a result of the massive lava flow from the 1914 eruption of Mt. Sakurajima, it became a land border connected to the Osumi Peninsula. There is a ferry service from Kagoshima Port that carries motorcycles and automobiles every 15 minutes.

The ferry operates 24 hours a day, as a precautionary measure in the event of a possible volcanic eruption. Upon arrival at Sakurajima Port, visitors will discover that there are many highlight destinations on the island. Touring all around the island is highly recommended, but following are two places of specific interest.

The first is the Kurokami Buried Torii (shrine gate), where you can feel the devastation of the Great Taisho Eruption. It is about a 30-minute drive from Sakurajima Port. The original 3-meter high torii gate of Kurokami Shrine was buried by pumice stones and volcanic ash only a day after the eruption, leaving only the upper part of the gate exposed.

After the eruption stopped, the idea of excavating the gate was considered, but it still remains in its post-eruption state, as a way to pass on information about this catastrophe to future generations. Next to the shrine is another miraculous wonder, a surviving akou (banyan) tree.

There are several observatories, but this is an introduction to the Arimura Observatory, which is built on top of the lava that flowed out in large quantities during the great eruption of 1914. It is the closest observatory to the south crater of Mt. Sakurajima.

The promenade is one km long, with a view of Kinko Bay, and the conical shape of the mountain is seen from there. Occasionally, a roaring sound coming from the crater can be heard, and depending on the direction of the wind, volcanic ash may fall. There are many places to take photos, and from the observatory, visitors can sense the greatness of nature from the active volcano.

What should I eat in Kagoshima?

The first thing you must eat in Kagoshima is Kurobuta pork. It was introduced to Kagoshima through Ryukyu (Okinawa) about 400 years ago, and after many years of breeding, it became Kagoshima’s unique black pig.

Then there is Kibinago (silver-stripe round herring). It is caught all year round, but its season is from spring to early summer. It can be enjoyed in a variety of ways, such as sashimi, fried, and grilled.

Finally, there is “Shiro Kuma” (literally, “white bear”). It is a shaved ice dessert originating in Kagoshima. It is made of fluffy shaved ice, topped generously with fruit and sweet red beans, and topped with condensed milk. Each store has a slightly different version, so it’s fun to compare them, and “Kuro Kuma” (“black bear,” made with dark brown sugar, coffee, or caramel syrup) is also available.