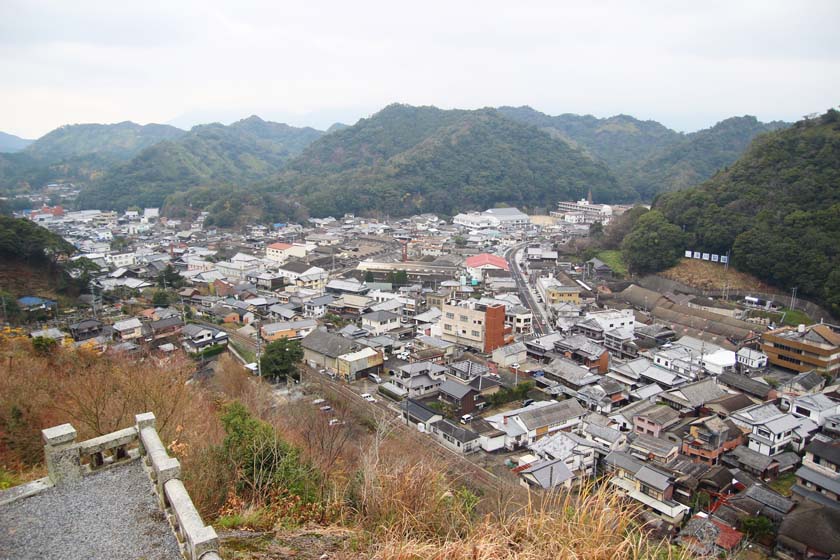 The beginnings of Aritayaki pottery trace back to when the Nabeshima clan of the Saga Domain returned to Japan after two military campaigns in Korea by Toyotomi Hideyoshi between 1592 and 1598. The warlords of the clan brought back a potter named Yi Sam-Pyeong (also known as Lee Cham-Pyung), who had been living on the Korean peninsula.

His subsequent achievements were invaluable to Arita, the Saga Domain, and Japan; and he continues to be revered and praised by the local people. In 1917, a monument to commemorate the 300th anniversary of Aritayaki was erected at the Tozan Shrine, and the Toso (Yi Sam-Pyeong) Festival is held every year on May 4, and is also attended by Korean officials.

This shrine was built in 1658 and was originally dedicated to Emperor Ojin, but in 1887, Yi Sam-Pyeong was also enshrined. The main feature of the shrine is the large torii gate made of porcelain, the largest in Japan; as well as the Komainu (mythological lion-dog), large water jars, and lanterns next to the stairs, all made of Aritayaki porcelain. The spring cherry blossoms and the autumn foliage are also beautiful.

The monument is about a 10-minute walk from the Tozan Shrine. It is located on a hill, and the view of the Arita townscape from there is worth seeing.

While working on the production of ceramics through trial and error, Yi Sam-Pyeong walked around Arita for nearly 20 years in search of good quality soil and stone, and finally found a suitable pottery stone for the production of porcelain at Mt. Izumi, 518 meters above sea level. As a raw material for Aritayaki porcelain, the stone was cut in all directions, and at the peak of its production, 10,000 tons were produced annually. Over the course of 400 years, a single mountain was transformed into pottery.

Currently, visitors are not allowed to enter the site without special permission. The pottery stones excavated from this site and turned into Aritayaki give us reason to ponder their rich history, having been delivered to the Tokugawa Shoguns, the Imperial Family, and even overseas to the royal courts of Europe. Imagine the olden days, when people dug by hand, and the sound of crushing rocks from the quarry could be heard far away in the distance.

The base of the pottery vessel is not a simple white, but a unique milky white called “Nigoshide,” and the highlight feature is the red painting on it. It is said that by the 1670’s, the process of making “Nigoshide” and applying the red paint in the most harmonious way, had already been perfected. At 352 Minamiyama-cho, Arita Town, there is a showroom and ancient pottery exhibition hall where representative works of the past generations can be viewed.

With a history of 360 years, the traditional techniques of Iro-Nabeshima have been handed down to the present. During the Edo period, Imaizumi Imaemon was the official painter and expert of red-colored porcelains of the Nabeshima clan of the Saga Domain. Today, Imaizumi Imaemon XIV continues to produce works of art ambitiously, making use of the traditional ink-splashing technique called “Sumihajiki.”

The Imaemon Kiln is located in a corner of the pottery and porcelain stores in Akaemachi, Arita Town. It is the oldest building in Arita Town, built in the first year of the Tempo Period (1831), after the Great Fire of the Bunsei Era (1818-1831).

This is one of the kilns where visitors can observe the manufacturing process, and boasts a history of over 260 years. There are several workshops and towering chimneys located at 2726 Maruo Hei, Arita Town. The gallery is divided into two pottery categories, dining tableware and housewares.

Museums, Galleries, and Other Facilities

Tombai are refractory bricks (bricks that can withstand high temperatures) from climbing kilns. Visitors can see expressively-designed walls in Arita Town, built by the Tombai, combined with pottery fragments and other materials in red clay. Many of these walls can be seen along the back streets, from near the large ginkgo tree in Izumiyama to the Arita Museum of Ceramics in Otaru.

China On The Park

The Fukagawa family opened a kiln in Arita in 1650, and Chuji Fukagawa established a company called Fukagawa Seiji Co., Ltd. in 1894. The company was appointed as a purveyor to the Imperial Household Agency, and at the Chujikan Gallery, visitors can see a remarkable collection of Fukagawa porcelain, including a large vase over two meters long that won the Gold Medal at the 1900 Paris Exposition; the Fukagawa family’s treasured collection; and the Meiji era memorial collection. The trademark of Fukagawa porcelain is Mt. Fuji.

This is a prefectural museum specializing in ceramics and porcelain, and displays masterpieces of Aritayaki, Karatsuyaki and other Saga ceramics, as well as works by potters representing various prefectures in Kyushu.

Established in 1875, and with a history of approximately 300 years since its founding, Koransha Co., Ltd.  simultaneously became the official supplier to the Imperial Household Agency. It has been awarded the Gold Medal at the World Exposition, and exhibits a variety of elegant works of art that have won honors around the world. The address is 3-8, Kohei 1-chome, Arita-cho.

In operation since the early days of Aritayaki porcelain, Iwao Porcelain is now in its 14th generational cycle. They produce porcelain not only for vessels, but also for the chemical industry, environmental equipment for water treatment, acid-resistant bricks, and custom-made landscape materials. The showroom exhibits these various items, and visitors can see the diverse products that have been crafted by this all-inclusive porcelain manufacturer. A total of 54,000 Aritayaki ceramic tiles used for pillars at JR Hakata Station were made by Iwao Porcelain.