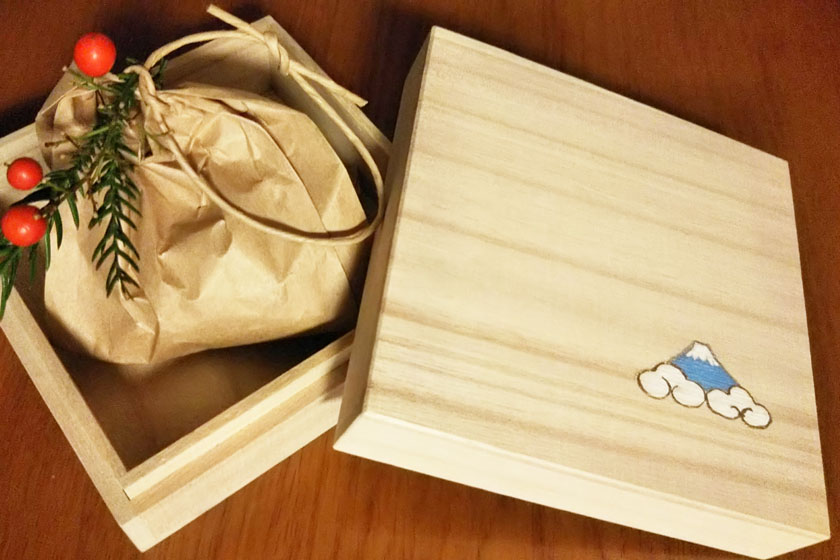 I found a very beautiful paulownia box with Japanese painting on it at a gallery in Fukuoka city in Kyushu. It is a piece of work by a Japanese-style painting artist, named Miwa Hisa. It is an accessory case and can be also used as room ornament. The gallery owner told me that Ms. Hisa runs a workshop for paulownia box painting in her atelier. Fantastic! I signed up for it.

Paulownia trees have been used to make containers for precious things since ancient times in Japan because of their excellence in humidity control and repelling insects. Some of them are made by skilled craftsmen and beautifully decorated. Therefore paulownia boxes are traditionally regarded not only as containers but also as a form of art.

In the workshop, Ms. Hisa taught us how to paint Nihon-ga on the boxes. Nihon-ga is a Japanese traditional painting method which uses crushed mineral pigments mixed with nikawa, natural liquid adhesive made of collagen of animal skin.

This is her atelier. Her students were learning the Japanese style painting.

First, I had to choose between two sized boxes. I chose the bigger one. Next was selecting a design for the picture. Ms. Hisa showed several designs which she created. I chose Mt. Fuji.

After deciding the position of the picture, I copied it on the box using tracing paper. Then I rubbed an ink stick on an ink stone. They are so tiny and cute! Ms. Hisa told me that the trick is to do it slowly and gently. I traced the line again with the ink and a brush. This is how it turned out.

The next step is coloring. First, I painted the base of the picture with a white coloring material called gofun. For Japanese style painting, gofun is very important. It is made of shell powder. Since shell powder is not adhesive, it needs to be mixed with nikawa glue. But, I skipped this process using ready-made tubed gofun for beginners.

Before I painted it, I diluted it with water on a pallet called umezara, which means a plum-shaped plate in Japanese. It is very Kawaii, isn’t it!

Once the base was dry, I colored in clouds and the mountain with blue and white. I used a Japanese traditional coloring material called gansai for blue. Gansai is made from pigment and glue. Ms. Hisa advised me to paint it on thickly.

In the end, I outlined the picture with silver and gold lines. Awesome!  Very traditional with a modern flair!

It might be a good idea to put some sweets in it and send it to a friend abroad. Or shall I use it as a Christmas present or a new year’s decoration? Oh! I want to make another one!