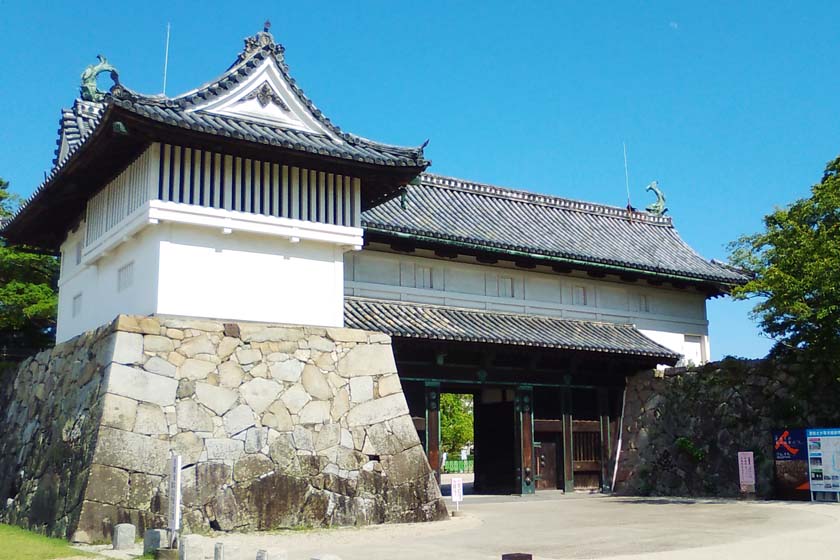 The Nabeshima clan of the Saga Domain was one of the largest clans in Kyushu, with 360,000 koku (traditional unit volume of rice) and Saga Castle. Completed in 1611, the castle was as magnificent as any other.

However, in 1726, it was struck by a huge fire that destroyed the castle tower, Honmaru (main building), Ninomaru (“second circle”; outer fortress), and Sannomaru (“third circle”; outermost area of the castle) in swift succession. Two years later, the Ninomaru was rebuilt, and became the center of the domain’s government. In 1835, a second major fire broke out at Saga Castle, and the Ninomaru was completely destroyed. The 10th lord of the domain, Nabeshima Naomasa, who later became known as a great ruler, immediately began to rebuild the main building.

It was completed in 1838, and Naomasa entered the building to take charge of the government. In 1874, during the Meiji era, the Saga Rebellion broke out, but the building was not burned down. Subsequently, it was used as a courthouse and an elementary school, but after World War II, it was partially dismantled due to deterioration.

Construction of the Saga Castle History Museum as a prefectural history museum began in 2001, and it opened in 2004. It is one of the largest wooden structures in Japan, faithfully restored to its original state in 1838.

The museum introduces in detail the technology, policies, and human resources of the Saga Domain from the end of the Edo period to the Meiji Restoration, when it was at the forefront of the most brilliant era in history, and was a leader in modernization. The large hall called the Sotogoshoin is impressive in size, using 320 tatami mats.

In addition, the Shachi Gate, a national important cultural property that has been in existence since the Tempo period, still bears bullet holes from the Saga Rebellion.

Admission is free, and volunteer guides are always available, with language capabilities not only in Japanese, but also English, Korean, Chinese.

The eminent figures of Saga who led Japan from the end of the Edo period to the Meiji Restoration are called the “Seven Sages of Saga.” Following are museums that honor three of them.

The museum of the Nabeshima clan, managed by Nabeshima Hokokai, a public interest incorporated foundation, was originally built in 1913 to commemorate the 100th anniversary of the birth of Nabeshima Naomasa, the 10th feudal lord of the Saga Domain. In 1927, after refurbishments, it was opened as the Chokokan. However, the museum was closed for a long period due to the Pacific War, and reopened in 2008. The building was designated as a national cultural asset, and various special exhibitions are held annually.

Noteworthy exhibits include a model of a steamroller that shows the cutting-edge technology of Saga at the end of the Edo period; one of the oldest collodion (wet plate) process cameras in Japan; and a glass collodion process photograph of Nabeshima Naomasa.

This museum honors Shigenobu Okuma, a dynamic, hard-working samurai of the Saga Domain, who played an active role in laying the foundation for modern Japan during the Meiji era. He served as prime minister twice, and was the founder of Waseda University. The museum was built next to Okuma’s former residence in 1967 to commemorate the 125th anniversary of his birth. In 2017, the building was designated as a national cultural property; and the old house was also designated as a national historic site in 1965, as it was a valuable samurai residence in the Saga Domain.

Sano, a brilliant student, exhibited his academic proficiency at the Kodokan school of the Saga Domain; was a student of Dutch studies and medicine in Osaka and Edo; and was also well-versed in science and chemistry. After returning to Saga, he became the head of the domain’s technical department, and was in charge of the research and production of steamships, steam car models, and telegraphs.

In 1867, he traveled to Europe as the leader of a delegation from the Saga Domain to the Paris Exposition, where he learned of the existence of the Red Cross in Western Europe. Later, during the Satsuma Rebellion in 1877, he witnessed a tragic situation during a scene of battle, and was deeply traumatized from the experience. He founded the Hakuaisha, the forerunner of the Red Cross, and rescued the wounded, regardless of whether they were enemies or allies.

Near the museum, along the Hayatsue River, is the site of the Saga Domain’s Mietsu Naval Station, the most advanced naval station in Japan at the end of the Edo period. It is a designated World Heritage Site. At the time, seamanship education and naval training drills were conducted not only with Japanese ships, but also Western-style ships, and the repair dock has been maintained to this day. Incidentally, the first viable steamship built in Japan was from the Saga Domain.

Shichimenso (Plant in the Tidal Flat)

This is an endangered plant that grows in clusters on the Higashiyoka tidal flat, along the Ariake Sea coast in Kawazoe Town in southern Saga City. It is a rare salt plant in Japan that hides under the surface of the water at high tide and appears at low tide. In late autumn, the beauty of this plant colors the entire coast bright red. It is also featured in an autumnal poem about the Ariake Sea.

The Hayatsue River branches off from the mouth of the Chikugo River, the longest reiver in Kyushu. The Shokaibashi is a 507-meter-long iron bridge that the Saga Line of the Japan National Railways used to cross. After the railway closed, the bridge over the two rivers was left behind, and is now maintained as a promenade.

It is an extremely rare bridge that is close to the Ariake Sea, which has the largest tidal range in Japan, and the central part of the bridge can move up and down about 23 meters to avoid contact with medium-sized and large ships that pass by. The bright red bridge harmonizes well with the surrounding scenery of the large rivers and tidal flats, and is a tourist destination that is brilliantly lit up at night. It is also a designated national cultural asset.

Sicilian rice is usually served on a plate with hot rice, sauteed meat, and raw vegetables, lightly topped with mayonnaise. About 30 restaurants offer various types of Sicilian Rice, each with its own original twist.

There is a small restaurant called Toki, a three-minute walk from the north exit of JR Saga Station, which has long been adding rare seafood from the Ariake Sea to its menu. You can enjoy the taste of “Mutsugoro” (mudskipper) simmered in sweetened soy sauce; “Warasubo” (green eel goby); “Umitake” (sea mollusk); unprocessed seaweed; “Hashikui” (goby); “Kuzzoko” (flounder); and the seasonal “Etsu” (Japanese grenadier anchovy); all of which can only be found in the Ariake Sea.