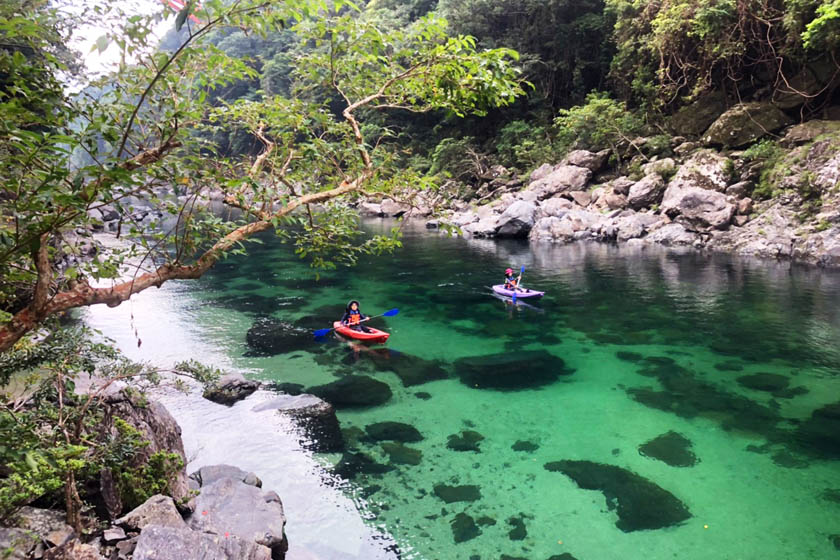 Yakushima is a treasure trove of nature

Yakushima is a beautiful small island located about 60 km south of Kyushu Island which is the southernmost and third largest of the four main islands of Japan. Yakushima was designated as a World Natural Heritage Site in 1993.

Most of the island is covered with forests and some of the cedars are estimated to be 2,000~7,200 years old with the oldest one called “Jomon cedar”. There are various indigenous animals and it is a spawning ground for loggerhead turtles. Yakushima is a treasure trove of nature.

Yakushima is well known as a great place for trekking, but there are many other ways to enjoy the island, such as diving, snorkeling, sea kayaking, and river kayaking. I’ll report on river kayaking the Anbo River.

Anbo village once prospered as a shipping port of Yakusugi cedar. I stayed at a guesthouse, “Manmaru” in the area. The guesthouse was a few minutes’ walk from the beach. The red tropical flowers in the yard were pretty. It was October, fall in Japan. Having gone hiking in the morning with a long-sleeved jacket, we could relax in nice, warm weather near the beach in the afternoon. That’s Yakushima!

Yakushima has a difference in elevation of nearly 2,000 meters even on such a small island. Temperatures drop dramatically with altitude. The average annual temperature is around 20 degree Celsius by the sea while that at the top of the mountains is about 6 degree Celsius.

I walked to the beach for swimming. It was small and nobody was there. It was just like a private beach! The seawater was not cold at all. Yakushima is in the mainstream of the Kuroshio Current and the average water temperature at the surface is over 19 degrees Celsius. It was a rocky beach, I was glad that I had flip-flops on.

The picture above shows the view from the guesthouse. Tanegashima Island is faintly visible above the horizon in the photo above. As you can see, the island is very flat. Yakushima is a round island with a series of nearly 2,000 meter-high mountains. Right next to it is the long, narrow, and flat island, Tanegashima. What a contrast!

A lot of delicious local food

For a beverage, we had Mitake Shochu produced in Yakushima. Shochu is a Japanese distilled spirit. We had it with hot water. It was so good!! Its label has a picture of banana leaves. However, it is not made from bananas but sweet potatoes.

The name of the shochu, “Mitake” means three mountains. It symbolizes three high mountains on the island, Miyanouradake, Nagatadake, Kuromidake. The Mitake shochu is also very popular nationwide. We enjoyed our conversation with the host family. They told us that they were fascinated by the nature in Yakushima and moved here from Kyushu.

After dinner, we walked to the grocery store near the guesthouse. On the way, we saw a red full moon just a little above the horizon. I had never seen such a reddish moon before. With the sky getting dark, the red big full moon was on our left and a lot of stars straight above our heads. What a wonderful view! We stood there looking up at the sky for a while.

At the supermarket, I bought a few jars of Tankan Jam. They were much cheaper than the ones at the souvenir shops. Tankan orange is Yakushima’s special product and contains twice as much vitamin C as other oranges.

A hot spring on the seashore

That night a friend of ours who lives in Yakushima called and told us that she would take us to Hirauchi Kaichu Hot Spring. That got us excited! It is a hot spring on the seashore that appears only at low tide. On that day, it was around one o’clock in the morning. She picked us up after midnight.

The picture below is the signboard at the entrance. Taking pictures is not allowed beyond that point.

Below is a picture of the hot spring in the day time.

We put 200 yen per person in the fee box. Do not forget to bring some coins for the fee.
The moon reflected on the surface of the hot spring was beautiful. The temperature was just right and the water had a slight smell of sulfur. Since it was very late at night, there were few people besides us. We enjoyed the hot spring in the magnificent nature.

This hot spring is available only for about two hours at low tide. Since the temperature of the hot spring is high, the bathwater becomes hotter as time goes by. Therefore, it is the best to start just a little before the low tide. It would not be easy to continue prohibiting wearing bathing suits in the spring. I hope their tradition will survive. Taking the hot spring in the wild nature is certainly one of the best memories of this trip.

You can have the view all to yourself

The next morning, it was cloudy. The sunlight was soft and there was no wind. It’s the best weather for kayaking. Our guide came to pick us up on time. After a short orientation, we started kayaking.

From the starting point, the mouth of the Anbo River, we viewed the Maedake Mountains. Yakushima mountains are divided into two ranges; The Maedake and the Okudake. The Maedake range rises from village areas near the shore to an altitude of about 800 meters while the Okudake range reaches close to 2,000 meters in the center of the island.

The top pointed mountain in the picture above is Myojodake. We paddled toward the mountain. Our boats skimmed over the calm and clear water. Both sides of the river are laurel-leaved forests. Suddenly, our nature guide cried, “Look! Mackerel!” The river in this area is in a brackish water region and the seawater is running at the bottom of the stream.

We enjoyed watching the natural masterpieces around the river from the eye level close to the river surface. As we went further, the riverside became rocky. Natural springs poured out from many spots and were running into the river along the rocks. The river became even more transparent. We almost felt like kayaking in the air of a V-shaped canyon.

We did not see any more fish. I heard that there are almost no fish in the rivers in Yakushima because they are too clear for fish to survive. What does it mean? It looks so transparent because hardly any planktons living there! Amazing!!

Most parts of the island is comprised of granite and the layer of the soil is very thin. The rain absorbed from the surface of the land stays in the soil only for a short time. Moreover, granite doesn’t contain many minerals. These factors create exceptionally clear water.

Water in Yakushima is some of the softest water in the world. It is graded as a hardness of 10, containing almost no calcium or magnesium. The off-flavored water is excellent for coffee or tea.

We rested on the riverbank. Our tour guide made us some coffee. It was great coffee at a great place! At this point, we turned to go back downriver. By that time, we learned how to paddle quite well. On the way back, we freely enjoyed slow kayaking. Unlike the hiking trails, we did not see many travelers around us. We enjoyed the views all to ourselves!

The estuary area was windy and the swells were getting high. A typhoon was approaching. The weather in Yakushima changes quickly! We wanted to stay there longer, but it was time to say good-bye to Yakushima. We hurried to the airport.

Yakushima is known as “the Alps on the Ocean.” It is full of unique nature. Not only the mountains but the sea and the rivers were beautiful. The food was good and the people were friendly. We had a great time. Goodbye for now Yakushima!