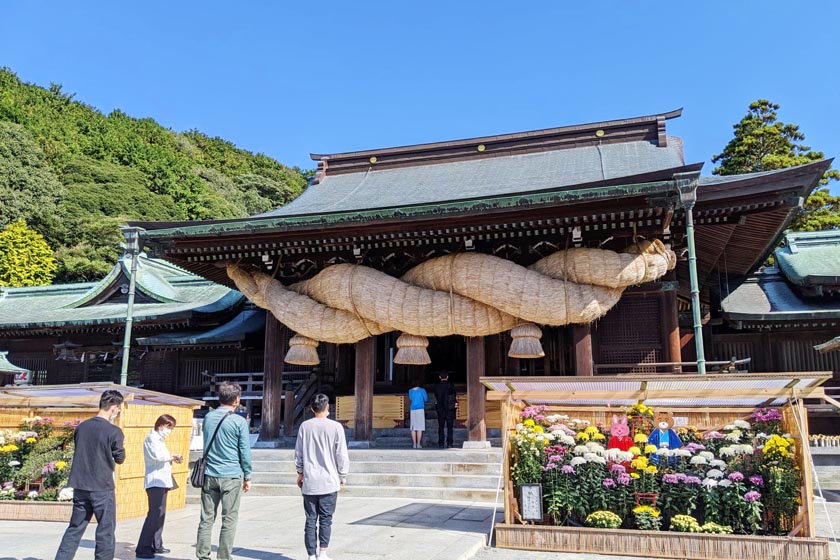 The cities of Fukutsu and Munakata, located east of Fukuoka City, were registered as a World Heritage Site in 2017 as Sacred Island of Okinoshima and Associated Sites in the Munakata Region.

Although not a part of the World Heritage Site, at Miyajidake Shrine in Fukutsu City, twice a year, in October and February you can see the “Path of Light,” made famous by a JAL (Japan Air Lines) TV commercial. The sun sets in a straight line from the grounds to the stairs, the approach to the shrine, and the sea.

A large sacred rope is hung in front of the worship hall. It’s the biggest one in Japan and is replaced every year by many of the shrine’s parishioners. There are also two other things in this shrine, the biggest drum and the biggest bell in Japan.  The gods enshrined here are the Empress Jingo and her two vassals.

About a 20-minute drive from here is Munakata Taisha Shrine. In ancient times, there were maritime people called Munakata people. At some point, they began to trade with the people living in the Korean peninsula, accumulating riches and ties to the Yamato Imperial Court, and became very powerful. They performed rituals to pray for safe voyage and the success of oversees exchange and offering up prayers of thanksgiving on Okinoshima Island. The island has many strict rules. For example, you must not speak of anything you have seen or heard there, and nothing can be taken out of the island, so many sacred treasures were left there. Excavations have unearthed neatly 80,000 artifacts that appear to date from the 4th to 8th century.

All the artifacts have been designated as National Treasures, and now we can see some of them in the Shinpo-kan Museum of Munakata Shrine. It’s a sight to behold, showcasing valuable and academically acclaimed sacred treasures from China, the Korean peninsula and distant Persia. Presently, a priest serves in 10-day shifts in Okinoshima.

At the Umi-no-Michi Munakata Museum near the Munakata Shrine, you can view exhibits about Okinoshima and watch videos of the island on a large screen. It is a free facility, so it is highly recommended to stop by.

Munakata Taisha is revered as the god of safe driving, so we go to purify a new car when we buy it. However, for the fishermen of Munakata area, it is not a place for car safety, but a place for boat safety.

The Three Goddesses of Munakata Taisha

Over time, nature warship of the island developed into the Three Goddesses of Munakata. They are of Tagorihime of Okitsu-miya on Okinoshima Island, Tagitsuhime of Nakatsu-miya of Oshima Island, and Ichikishimahime of Hetsu-miya on Munakata Grand. Generally speaking, Munakata Taisha refers to the Ground Shrine, Hetsuu- miya, but these three shrines were combined to form Munakata Taisha.

Oshima Island is located between Okinoshima Island and the land. It is a 25-minute ferry ride from the Konominato Ferry Terminal. In addition to visiting the Nakatsu-miya Shrine, you can also visit the Okitsu-miya Yohaisho on high ground, which was built in order to worship Okinosima Island from afar. You can also enjoy visiting other places by renting bicycles. The view of the azure sea from the windmill observation deck on the northern part of the island is breathtaking.

The ground of Hetsu-miya Shrine is very spacious. The buildings of the worship hall and the main hall, which were rebuilt in the 16th century, are magnificent. You should also visit Takamiya Saijo, which is located on the top of a small mountain passing through a dense forest. It’s a very sacred place, and the rituals are held solemnly on the 1st and 15th of every month. The atmosphere is reminiscent of the rituals at Okinoshima Island.

When one unravels the history of Munakata, the connection between Kyushu and China and the Korean peninsula, as well as the involvement of the Yamato regime, is magnificently romantic.

There are many tombs of the great families in Munakata and Fukutsu City. Along with the Shimbaru-Nuyama Mounded Tomb Groups, Okinoshima Island was inscribed on the World Heritage list as the Sacred Island because there were people who lived with the gods, praying for their daily safety and giving thanks for their protection in the long flow of time.