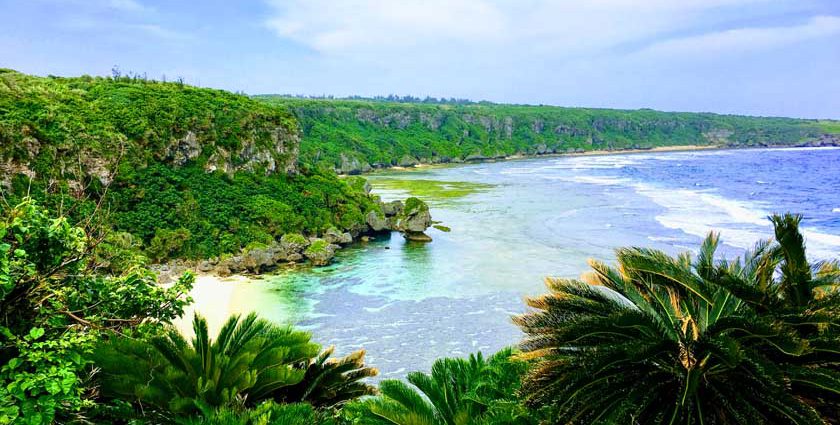 Where is Okino Erabu island?

Where is Okino Erabu island? Is there a volcano on the island? Well, people often ask me these questions. Okino Erabu island is the second southernmost of the Amami islands, formed by upheaved coral reef. The island is located 552km south of Kagoshima city and 60km north of the Okinawan mainland. Though it is closer to Okinawa, the island belongs to Kagoshima Prefecture.

Okino Erabu island was occupied by two domains, namely the Ryukyu Kingdom, from what is now Okinawa, and the Satsuma clan, from present day Kagoshima, depending on the era. That’s why the island has aspects of their distinctive cultures, which fascinates people!

You might frequently hear the word, ‘Menshori’ on the island. It means ‘Welcome!’. ‘Mensore’ means welcome in the Okinawan dialect, which reflects the island’s history. Okino Erabu is not a touristy island. If you want to spend a relaxing time in nature, Okino Erabu island is the place to visit.

The symbol of the island is the Erabu lily. You might be mesmerized by its pure white petals and delicate aroma.

The island is the only habitat of the lily. In 1899, a British trader was impressed with the beautiful lilies blooming throughout the island, and he ordered local people to cultivate them for him. He came back to the island a few years later and bought them at an amazingly high price. The Erabu lily has been cultivated by local people since then, and the graceful, beautiful flower is loved by people beyond the border.

You can see the delicate lilies at Kasaishi Seaside Park from the end of April to the middle of May, when they spread out like a carpet. These pictures were taken after the rain, and the raindrops adds an extra beauty to the flower. The scenery from the observation tower in the park is also excellent! When you go up the stairs to the top, the picturesque view will be a highlight of your stay on the island.

Rugged rocks are ubiquitous on Okino Erabu island and remind us that the island is made of coral reef. The main characteristic of coral is that it is easily eroded by water.

‘Fucha’ means ‘spout out’ in the Okinawan dialect, and 20m to 70m water spouting from a cavernous hole hollowed out of coral hill looks so dynamic when it’s windy and high tide. It is so much fun to look into the hole, and so exciting to enjoy the beauty of nature as well as the bizarre and zigzag-shaped rocks and dynamic waves from Fucha!

Cape Tamina is a precipitous cliff, and at 51m high, is well known scenic spot that overlooks the great eroded cliff and attractive deep blue sea!

You might see wild sea turtles on a calm day. Unfortunately, the wild sea turtles were absent on the day we visited, but there are some leashed goats on the cape. Wow, are they kept here to look at the amazing view every day? So peaceful!

The park is 80m above sea level and highest spot in Wadomari town. A splendid and expansive view of the tip of the island is waiting for you! The spiral shell monument is an observation point. Why don’t you enjoy the harmony of the green of the island, the reddish earth of the farms, and the beautiful blue sea from Koshiyama Park?

If you a samurai fan, you might know about ‘Saigo Takamori’ known as one of the last influential samurai at the end of the 19th century. He was exiled by his master in Satsuma, now Kagoshima, to Okino Erabu island. It was almost the same as capital punishment at that time.

His relationship with local people and his one year and 7 months on the island are exhibited at the museum. The jail is reconstructed at the site too. The time he spent in jail was terrible, but his precious time in the island enabled him to reconsider his life.

After Saigo was permitted to go back to Satsuma, he made great achievements in times of turbulent political change in Japan. Nanshu Shrine was constructed in 1902 and dedicated to his spirit. It is in the vicinity of the museum.

How do you get travel tips? Well, getting advice from locals might be one good way to find something interesting. Degi Domari Beach is recommended by locals but is rarely written about in travel books. The uniquely eroded rocks look like natural art. If you look into the seawater, colorful fish might be swimming in the hollowed holes. This is a secret spot to enjoy swimming as well as snorkeling.

One of the most popular souvenirs of Okino Erabu is brown sugar shochu which is a distilled alcohol made from brown sugar! It is only allowed to be produced on the Amami islands such as Amami Oshima, Kikai, Tokunoshima, Okino Erabu and Yoron. Don’t you think that trying a local drink is a real pleasure? The recommended brand ‘Hanatori’ is good for anyone, including people who haven’t tried shochu before.