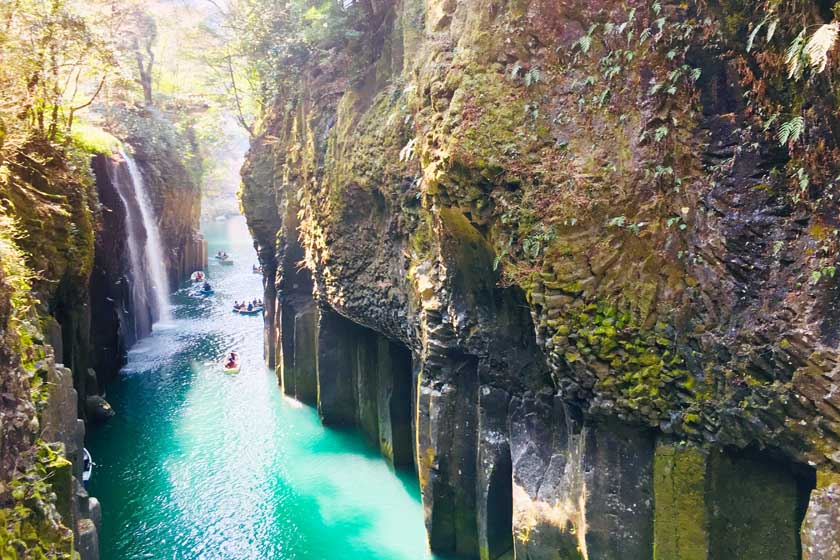 Takachiho, located in the northern part of Miyazaki, is surrounded by rich nature and mountains. It is named ‘the Home of Japanese Myths’ because of the existence of mythical shrines and legends. Even those who don’t have knowledge about the myths might feel some invisible and mysterious atmosphere. Is this your first time to visit Takachiho? If so, let us introduce ‘the best things to do’!

This is a great gorge created by columnar joints, where massive amounts of volcanic magma drastically cooled from volcanic activity of Mt. Aso. The spectacular view of angular rocks will overwhelm people. They are a splendid artworks of nature.

There are two ways to enjoy the gorge, a 1 km long walking path and a 30-minute punting boat. Some features of the path are a lookout, a giant rock which was thrown by a legendary ogre, and a photo spot to take pictures of three bridges in one frame.

The lookout is one of the best spots to look at Manai falls. The punting boat gives you another pleasant moment close to the dynamic gorge and the falls from water level. That will give you a different impression of the gorge in comparison to the path and you will be showered with negative ions from the falls.

It is free of charge to take a walk on the path. There is a charge for punting boat and a booking is needed. We recommend to book in advance.

The booking is available on the web one week before your arrival. Phone calls are not accepted, but you can take a boat if there are vacancies at the pier on the day. It can be cancelled depending on the weather and high water.

This shrine is the grand head of 88 shrines in the town of Takachiho, founded over 1900 years ago. The benefits are driving away evil spirits, match making and traffic safety.

There is a ‘Couple Tree’ at the site which creates an awe-inspiring atmosphere. Your wishes are believed to come true if you take a stroll around the tree three times with your partner or friend.

A spiritual stone called ‘Shizumeishi’ embedded on the ground is well known to ward off your anxieties. You might feel some warmth from the stone when you hold your palm over it.

This shrine consists of three areas, the west shrine, east shrine and Amano Yasuawara shrine. According to the myth, the Sun goddess, Amaterasu, hid herself in the cave because of some mischief which was done by her brother, Susano. The sacred cave, situated crossing a river, is worshipped at the west shrine.

We can’t look at the sacred cave from the hall of the west shrine, however, a priest will take you to a worshipping place, located right behind the hall upon your request. Taking photos is not allowed at the worshipping place. It will be a great experience to visit there.

About 15 min walk takes you to Amano Yasugawara shrine from the west shrine. Comfortable shoes are recommended because of its unpaved and bumpy approach. You might have a feeling of being purified by the clear river water, the chirping songs of birds and the sound of gentle sound of water. An arched bridge on the way is known as a spiritual spot.

There are uncountable piled stones as far as the eye can reach near the shrine. They are piled by worshippers who believe that their prayers would be returned. A yawing cavern which is 40m in width and 30m in depth is believed as a place the myriads of gods gathered. The existence of the shrine in the cavern, creates a distinctive and mysterious atmosphere.

It is 513m high and you can look over the view of surrounding mountains. This is a legendary hill where Takeno Iwatatsuno Mikoto, the god of the nation, viewed the nation from. You can enjoy splendid views such as the Takachiho Basin to the east and the Aso mountain range to the west.

A sea of clouds appears only a few times throughout the year in autumn and winter. If you are lucky and the weather condition is good, you might see the incredibly stunning scenery that comes with it. There is a wooden swing there, why not enjoy the great view on the swing?

Let’s go for a journey to the sky from Takachiho station to a railroad bridge which is 105 m tall by utilizing a closed railway line. It is a popular and exiting sightseeing means to enjoy the nature there. A conductor will give you guidance while watching the view from the car which has no roof.

Go to the station to get a ticket on the day. No booking is requested. It can be cancelled depending on the weather. It operates 10 times a day.