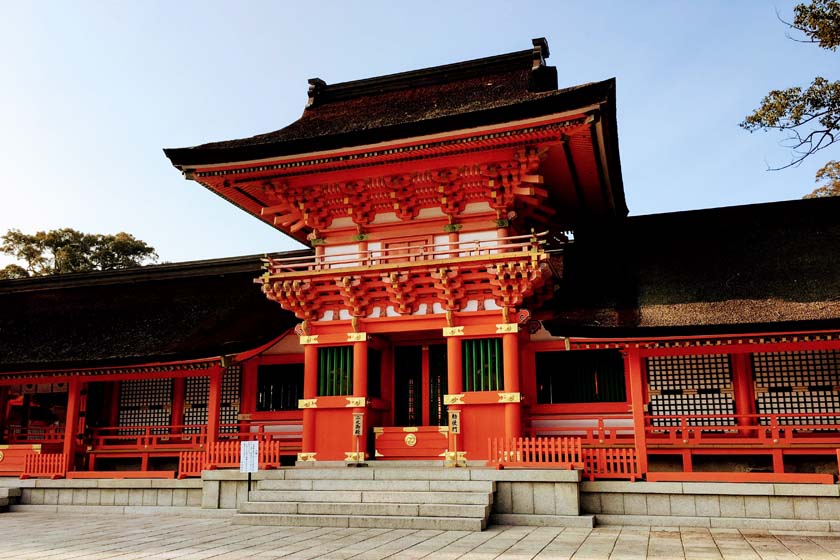 The head shrine of 40,000 Hachiman Shrine in Japan

The Usa Jingu Shrine in Usa city, Oita, founded in 725, is the head shrine of 40,000 Hachiman shrines throughout Japan. It is believed to be the birthplace of the ‘Shinbutsu Shugo (*1) ‘, or the syncretism of Shinto and Buddhism.

The main hall is designated as a national treasure, and there are some sub and auxiliary shrines within the grounds. The vivid vermillion color of the shrines has the power to drive away evil spirits.

Usa Jingu Shrine is popular as a sacred place to energize our power today. The Emperor of Japan has more than 2000 years of history, and the current Emperor Naruhito is the 126th generation. Do you know the reason why the Emperor’s family lineage has continued for so long? Well, that is thanks to a divine message from the god of Usa Jingu Shrine. Shall we go on to find the historical drama?

(*1) Shinto is Japan’s indigenous religion, while Buddhism was introduced from China in the 6th century. The teaching of the two religions coexisted and was even harmonized by the end of the 19th century in Japan. However, the combined belief was distinguished between Shintoism and Buddhism since then. The Emperor of Japan is considered as a descendant of the god of Shinto according to Japanese mythology.

The historical drama “Dokyo Incident’ occurred in 769. The 46th and 48th Empress Shotoku was a female but took the throne twice as the nation’s leader. When she got sick, a monk named Dokyo prayed for her recovery by chanting a Buddhist sutra.

It was considered that reciting a Buddhist sutra or praying for the Buddha has a special power to cure a disease in Japan in the middle ages. The Empress Shotoku showed thanks to the monk Dokyo as she was pleased with him and gave prestigious positions in the imperial court.

Dokyo came to get a special power in the imperial court little by little. One day, the Empress Shotoku received the divine message from the god of Usa Jingu Shrine, describing that ‘If you appoint the monk Dokyo as the next Emperor, the nation would be peaceful.’ The Empress Shotoku, who loved Dokyo, was happy to hear the message, and she sent an imperial messenger named Wakeno-Kiyomaro to the Usa Jingu Shrine to make sure the divine message is correct just in case.

However, the real message Wakeno-Kiyomaro heard there was ‘Anyone never ever could be the Emperor of the nation.’ Well, it means the first divine message was totally the opposite! The Empress Shotoku believed the real message received at the Usa Jingu Shrine.

The Meoto-ishi (a couple-stone) made of two triangle-shaped stones is paved on the way to the main hall. It is believed that people can be happier if you stand on both stones, and if you are with your partner, stand on each stone while holding hands! After passing the beautiful gate Saidaimon, you’ll be in the upper main hall of the Usa Jingu Shrine.

The three shrines designated as a national treasure

The main hall consists of three shrines and is designated as a national treasure.

First, the left shrine is dedicated to the Emperor Ojin, or the god of victory. Second, the middle shrine is dedicated to the three goddesses of Munakata, or the goddess of fortune, marine safety, and performing art. Lastly, The Empress of Jingu, a mother of Emperor Ojin, is enshrined in the right shrine to give people power such as safe childbirth, prosperity in the household, drive away evil spirits, and academic achievement. Each shrine looks like an ‘M’ from the side.

The praying manner in Usa Jingu is different from others, ‘bow twice, clap hands four times, and bow once more is the proper way. The sacred camphor tree near the main hall is more than 800 years old, and it is well known that your wish might come true by touching it.

There are two holy areas, the upper main hall “Jogu” and the lower hall “Gegu” in Usa Jingu Shrine. The upper main hall is worshipped as the god of the nation, while the lower hall is for the people, and meals for the gods are prepared here. Thus, the recommended manner is to pray at both halls. The lower hall structure is not in an M shape style, but the praying style is ‘bow twice, clap hands four times, and bow once more’.

Kurehashi bridge with a door opens only once every ten years

Kurehashi bridge with a roof and doors is used only when a messenger from the Emperor visits Usa Jingu Shrine every ten years. The ruin of Mirokuji temple near the bridge tells a history of ‘Shinbutsu Shugo’, or the syncretism of Shinto and Buddhism. Don’t you think it is unique that two religions were harmonized in the same grounds? This is one of the distinctive cultures in Japan.

How did you enjoy learning how to explore and pray at Usa Jingu Shrine? People have been fascinated by its rich history to protect the Emperor’s family lineage.

If you know the background of the shrine, it is reasonable that people today call Usa Jingu Shrine as ‘Power-Spot’, meaning spiritual location with mystical power. You can enjoy cherry blossoms and autumn leaves, depending on the season. Why don’t you add Usa Jingu Shrine to your bucket list when you visit Japan?

Licensed National Guide, Certified General Travel Services Manager, 1st Grade Instructor of Inbound Tourism. 17 years of experience in the tourism industry, including working as a tour guide in Australia and Canada for Japanese tourists. I love traveling, eating, and taking beautiful pictures!
Are you a travel lover? Do you want to try a new experience? If yes, check out my articles for your traveling tips. Other than being a professional and friendly guide, I share travel information about Japan as a freelance writer.

Note:
The accuracy of information is not guaranteed. Please contact the relevant agencies about the latest information. Unauthorized copying and replication of the contents of this site, text and images are strictly prohibited. All Rights Reserved.